You are here: Home / Mediterranean / ‘If Lebanese rockets strike Israel, it’s a declaration of war’ 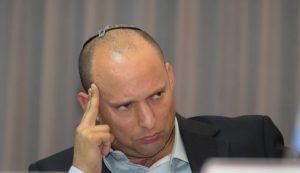 Education Minister Naftali Bennett, who also serves as chairman of the Jewish Home party and as a member of the security cabinet, spoke on Monday about the security and national situation in Israel, as well as about Israel’s attack on a Syrian weapons target, like reported by inn.com.

“The Israeli government’s policy is very consistent,” Bennett said. We will work to prevent Hezbollah from gaining strength in Lebanon. On our northern border, there is an attempt to threaten Israel strategically and Hezbollah currently has over 100,000 rockets and is working to improve their aim.”

“We are doing all we can to prevent Hezbollah from succeeding, and we will continue to do so.

“In the past, our policy was to fight with Hezbollah, but not to touch sovereign Lebanon. That’s what we did in the Second Lebanon War, when I commanded a group of soldiers. Our orders were to harm Hezbollah and only Hezbollah, and to cause no harm to any Lebanese government buildings.

“But I no longer accept this differentiation.

“The new policy must be that Lebanon is Hezbollah and Hezbollah is Lebanon. I have been pushing for this policy change for over two years, for the simple reason that all of Hezbollah’s infrastructure is intertwined with that of Lebanon.

“Hezbollah is part of the government, they chose the president, and all of Lebanon’s leaders say that Hezbollah is part of their national security. We can’t keep looking for a needle in the haystack of Lebanon. Every Lebanese citizen needs to know that if rockets are fired on us from Lebanon, we will see it as the Lebanese government’s declaration of war, and we will act accordingly.”

Bennett emphasized that Israel has no intention of going to war against Lebanon, but said the government “definitely knows how to handle such a situation if it becomes necessary.”

Regarding Rabbi Yigal Levenstein’s comments about women in the army and co-ed combat units, Bennett said, “This issue has become unnecessarily politicized. This is the kind of thing you say quietly. I was very clear about my stance on the issue, but Defense Minister Avigdor Liberman’s (Yisrael Beytenu) threat to close the pre-army yeshiva (mechina) in Eli is unacceptable and we will not allow it to happen.

“There are professors in universities who have horrifying [anti-Zionist] personal opinions, but I never heard Liberman talk about sending them home just because of their opinions. Making comments about Eli (pre-army preparatory yeshiva, known as a mechina in Hebrew, ed.) is nitpicking. I suggest the Defense Minister travel to Eli, visit the memorial room in Eli, and rethink his opinion on the matter.

“I don’t really know what Liberman is looking for. Maybe he wants the left to like him?… If it’s politics, let him do what he wants. But we will not allow him to harm the mechina. It’s unacceptable, and no one thinks closing the mechina is the right thing to do. We can fix what needs fixing, but Liberman is walking in the wrong direction.”

Regarding the argument between the Education Ministry and the Finance Ministry on the subject of teachers’ salaries, Bennett said, “After several years during which teachers’ salaries did not rise, we raised beginning teachers’ salaries by 20%. We also ensure teachers who work in more than one school are provided with rides, and we have given better working conditions to experienced teachers.

“We like to say that we place teachers at the top of the priority list. Teachers should be at the top of the social pyramid. We care about every teacher, and that’s very good news for all Israeli teachers. It’s our opportunity to tell them thank you.

“I hope the best candidates will become teachers, because that’s the educational ideal. The salaries will never match those of hi-tech, but we’re trying to create a respectful and honorable salary. We’ve taken big steps in the right direction.”