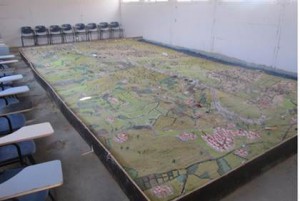 The IDF has a new tool to prepare for the apparently inevitable next round of fighting against Hamas and Islamic Jihad terrorists in Gaza – a miniature training model precisely rendering the terrain of the terror stronghold.

Unique new 3-D model at 50 square meters in size will give IDF officers special training to be one step ahead of the terrorists.

The three dimensional model was recently built at the IDF Southern Command’s training base, and exposes all of the topographical structure of Gaza, its cities and towns, as well as the security barrier and Jewish communities in the adjacent Gaza Belt region.

A wide variety of drills meant to prepare for various combat realities in the area will be made possible thanks to the model, which will give IDF trainees an in-depth level of knowledge regarding the lay of the land.

The model, which is 50 square meters in size, “creates training of a higher level than looking at a map or aerial photographs,” said the base’s commander, Lt. Col. Yaron Buskila.

“The installation allows officers to learn the scope of the land before arrival at the front and starting continuous security (activities),” said Buskila.

Soldiers will use the model to prepare for operations in Gaza, Buskila added, noting that “the model will help many officers and soldiers to familiarize with the Gaza Strip and the communities adjacent to it.”

“The region is very crowded and complicated in terms of communities and buildings, both within the Strip and also in terms of the communities surrounding it. Thanks to this unique model we will be able to get a feel of the territory and give a wide picture of the front with ease,” he concluded.