You are here: Home / Mediterranean / IDF strikes on Islamic Jihad in Gaza, Syria 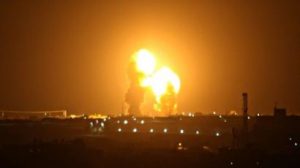 Israeli air strikes targeting the Islamic Jihad militant group in the Gaza Strip and Syria killed at least six fighters, a war monitor said Monday; the strikes came after members of the jihadist group fired a barrage of rockets at Israel.

It followed more than 20 rockets and mortars fired from the Palestinian enclave, themselves a response to the killing of an Islamic Jihad militant along the Gaza-Israel border as he laid a bomb at the fence.
Islamic Jihad, which along with allied group Hamas has fought three wars with Israel since 2008, operates in both the Gaza Strip and Syria.
The IDF said it had struck Islamic Jihad targets on the outskirts of Damascus, including a base “used as a hub” for the group’s activities in the country.
It said the sites attacked were used for “research and development of armaments” that are manufactured in Syria and the Gaza Strip and also produced dozens of kilograms of rocket fuel each month.
Israel also Sunday banned civilian aircraft in the Golan Heights region from flying over 5,000 feet until the end of the month.
Islamic Jihad, which is allied with Syrian President Bashar Assad, confirmed early Monday that two of its fighters were killed.
The group’s military spokesman said: “Israeli aggression in Damascus, and the deaths of two of our fighters as a result of the bombing, is an event that cannot be ignored. It will not be allowed to pass, and the debt is not settled.”
The British-based Syrian Observatory for Human Rights later confirmed that four additional pro-Assad, Iran-backed fighters died in the strike.
At least one of the Iran-backed fighters was Syrian, while the nationalities of the others remained unknown, Observatory head Rami Abdel Rahman told AFP.
A Syrian military statement reported an Israeli attack near Damascus International Airport on Sunday night, saying its air defenses confronted Israeli rockets coming from the direction of the Golan Heights. It said the defenders intercepted or shot down most of the missiles.