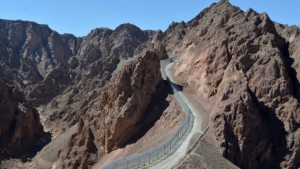 The IDF ordered the closure of Israel’s Highway 12, which runs along the border with Egypt, starting Friday morning and until further notice.

IDF Chief of Staff Gadi Eisenkot gave the order late Thursday night, a day after a deadly attack by Islamic State-affiliated extremists killed over 70 Egyptian troops in the Sinai Peninsula. The closure was approved by Defense Minister Moshe Ya’alon.

The measure is meant to be temporary, Israel Radio reported.

Israel was on high alert following the sophisticated attack on Egyptian security services in neighboring Sinai. The Israel Defense Forces beefed up its presence along the border with Sinai following the attacks, as security officials cautioned that the IS-affiliated group Wilayat Sinai could attempt to overrun the Gaza Strip.

On Thursday, the Defense Ministry announced that it has successfully upgraded its Iron Dome missile-defense system, without elaborating on the specific improvements. Israel has several such systems spread across the country, including in the Eilat area in the south.

A series of tests was performed to “widen the capacity and improve the performance” of the system, the Defense Ministry said in a statement. It added that Israel faces “an unprecedented array of threats” presumably ranging from mortars to long-range missiles from a variety of origins.

Also Thursday, a top IDF official said the Israeli military had acquired intelligence that Hamas was providing weaponry and other support to the Islamic State’s Sinai affiliate, Wilayat Sinai, the group thought to be behind Wednesday’s attack.

The Coordinator of Government Activities in the Territories, Maj. Gen. Yoav Mordechai, told the Arabic-language news network al-Jazeera that along with military support, Hamas has also been providing medical support to injured IS operatives.

Wednesday’s attack, which included a wave of suicide bombings and assaults on security installations by dozens of militants, saw Sinai’s deadliest fighting in decades. Security officials said dozens of troops were killed, along with nearly 100 attackers.

Another top Hamas commander involved in training fighters, Abdullah Kishta, had been lending his expertise to Islamic State jihadists in Sinai, Mordechai said, adding that the IDF has “proof” of these direct ties.

Wilayat Sinai (Province of Sinai) was known as Ansar Bayt al-Maqdis before it pledged its allegiance to the Islamic State.