You are here: Home / Mediterranean / IDF sends reinforcements to Golan as Assad offensive picks up 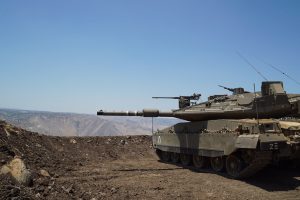 The Israeli military sent additional tanks and artillery cannons to the Syrian border on Sunday in light of a renewed offensive by dictator Bashar Assad and the Russian military against the remaining rebel holdouts in the country’s southwest, the army said according to toi.com.

The reinforcements were sent to the Israel Defense Forces’ 210th Bashan Division, which guards the Golan Heights, the army said.

“This was [done] as part of IDF preparations and preparedness in light of developments in the Syrian Golan Heights near the border,” the IDF said in a statement.

The military vowed a “determined response” to any strike — deliberate or accidental — that hits Israeli territory from Syria.

“The IDF sees great importance in maintaining the armistice agreement between Israel and Syria from 1974,” the army said.

“The IDF will continue to uphold its principle of non-involvement in what is happening in Syria, alongside a policy of delivering a determined response to violations of the sovereignty of the State of Israel and threats to its citizens,” the IDF said.

Since the renewed campaign by Assad’s forces, with aerial support from Russia and ground assistance from Iran-backed militias, began earlier this month against rebel-held towns in the Daraa province, which abuts Israel and Jordan, some 160,000 Syrian nationals have fled their homes and traveled to the borders of the two countries, seeking refuge.

Both Israel and Jordan have stated that they will not accept refugees, but have provided humanitarian aid to the displaced people.

Last week, the IDF announced it had delivered several tons of humanitarian aid — food, clothes, medicine — to southern Syria in light of the deteriorating situation in the hastily erected displaced person camps near the border.

Israel on Friday night also brought in six injured Syrians, four of them children orphaned in the Syrian-Russian attacks, for medical treatment in Israeli hospitals.

“Israel has been giving humanitarian aid for years and will continue now in light of the need for it,” the army said.

On Sunday morning, Prime Minister Benjamin Netanyahu reiterated that Israel would provide assistance, but not allow refugees into Israel.

“We will continue to defend our borders. We will extend humanitarian assistance to the extent of our abilities. We will not allow entry into our territory and we will demand that the 1974 Separation of Forces Agreement with the Syrian army be strictly upheld,” Netanyahu said at the start of the weekly cabinet meeting.

The prime minister added that he, the defense minister and the IDF chief of staff were all in constant contact with the United States and Russia — the two main powerbrokers in Syria — about the fighting in the country’s southwest.

Since June 19, backed by Russia, the Damascus regime has carried out a deadly bombing campaign in southern Syria as it pushes to retake the strategic area bordering Jordan and the Israeli Golan Heights.

As of Saturday, government forces controlled more than half of Daraa, up from just 30 percent at the start of the operation, the Syrian Observatory for Human Rights monitor said.

Eight towns in the province returned to regime control under Russia-brokered deals, the Observatory said.

That came “after talks in each town between Russian generals as well as local notables and remaining rebels,” Observatory head Rami Abdel Rahman said.

The so-called “reconciliation” deals for the towns’ surrender are the latest in a string of such agreements across the country that have seen the government retake opposition-held areas, often after devastating air and ground offensives.

Retaking the whole of Daraa province would be a symbolic victory for the regime, as it is seen as the cradle of the anti-Assad uprising seven years ago that spiraled into civil war.

Regime forces continued to bombard other parts of Daraa province on Saturday, with airstrikes killing at least 15 civilians, according to the Observatory.

The recent escalation comes despite Daraa and opposition-held parts of neighboring Quneitra province being included in a so-called “de-escalation zone” agreed on by Russia, the United States and Jordan last year.

Syria’s main opposition group, the Syrian Negotiation Commission (SNC), implored the international community to speak out against the violence.

“We call on the international community to condemn the brutal breaching of the de-escalation zone… and take all possible measures to halt this assault on our people,” SNC spokesman Yahya al-Aridi said in a statement.

In total, 115 civilians have been killed in regime bombardment on the province since June 19. In that same period, 96 pro-regime fighters and at least 59 rebels have lost their lives.

The spike in violence in Daraa over the past two weeks has forced around 160,000 people to flee their homes, according to initial United Nations estimates.

These include around 20,000 to areas near the Naseeb border crossing with Jordan, a country that already hosts more than 650,000 registered Syrian refugees and says the actual figure is closer to 1.3 million. Thousands more have fled to the border with Israel on the Golan Heights.

Amman has said it cannot open its frontier to any more Syrians fleeing the seven-year conflict, but on Saturday announced it had sent aid across the border to the displaced.

More than 350,000 people have been killed in Syria since the war started in 2011 with the brutal repression of anti-government protests.