You are here: Home / Mediterranean / IDF prevented an Hamas border crossing from Gaza 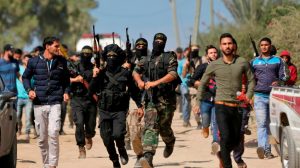 Monday afternoon, when the IDF confronted violent disturbances on the fence, an intelligence alert was received that a Hamas squad was planning to place an explosive charge on the fence to allow to for a mass infiltration into Israel, like reported by jpost.com.

Troops belonging to the IDF’s Magellan unit stationed themselves opposite the expected attack point in the northern Gaza Strip. When the squad of eight terrorists emerged from amidst the violent demonstration which was taking place, two armored IDF vehicles drove over the fence and were attacked by the cell with explosives and light weapons.

Troops then engaged the cell, opening fire at them from Israeli territory while a tank and IAF aircraft struck the terrorists’ position. All eight terrorists were killed in the exchange of gunfire.

“Yesterday, during a violent riot, which included the burning of tires, throwing of pipe bombs and throwing of stones, we saw shots fired at our forces and realized that Hamas operatives were the ones who carried out the shooting. Due to this, the crowed dispersed and I gave an order to fire. The fighters were operating professionally, with great courage and precision, and prevented a significant shooting attack on our forces,” a commander in the unit said.

According to the army a pistol, grenade launchers, charges and preparations for opening the fence were found in the place where the firefight was.

The army believes that the quiet on Tuesday is likely due to Hamas assessing the situation and calculating their next step.