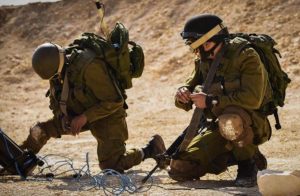 Israeli soldiers destroyed two Syrian military posts in the demilitarized zone separating the two countries, in a warning to Syrian President Bashar Assad, whose forces are encroaching on the Golan Heights, according to a television report on Tuesday, like reported by toi.com..

The covert nighttime operation last week saw special forces from the Nahal and Yahalom units cross into Syrian territory and destroy the two military positions on the Golan Heights, before slipping back into Israel undetected, Channel 12 reported.

The raid came in response to the Syrian military’s growing presence in the buffer zone, in violation of international agreements, the report said.

“You have to come to an operation like this very focused,” said Capt. Michal Zilberg, a company commander in the Granite Battalion of the Nahal Brigade. “The moment you cross [the border], your pulse quickens slightly. You are facing the enemy. You must understand that we were like 500 meters from a manned position.”

The army said it would continue to operate to prevent Assad’s forces, which are allied with Iran and the Lebanese Hezbollah terror group, from bolstering its military presence on Israel’s doorstep.

“We are familiar with the cooperation between the Syrian army and Hezbollah, and any military entrenchment by the [Syrian army] has the potential to be a dual entrenchment,” said Lt. Col. Tal Goritsky, commander of the Granite Battalion of the Nahal Brigade. “We won’t allow the south of Syria to become the south of Lebanon.”

Israel has launched hundreds of strikes in Syria since the start of the civil war in 2011. It has targeted government troops, allied Iranian forces, and fighters from the Lebanese Shiite terror group, Hezbollah.

It rarely confirms details of its operations in the country, but says Iran’s presence in support of Assad and Hezbollah is a threat and that it will continue its strikes.