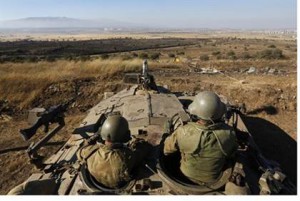 The IDF on Tuesday afternoon declared a region in the north-east of the Golan Heights near the border with Syria as a “closed military territory,” in a move that could potentially signify intelligence of a direct threat from over the border.

The order blocks access for citizens who do not live in the region, so as to allow IDF forces to freely move in routes adjacent to the border.

“The IDF is closely following the developments in the fighting in Syria and on the Golan Heights border,” the IDF released in a statement.

It added that the army “is working to preserve the security in the area.”

Despite the statement focusing on Syrian fighting, the security services stressed that the closure of the area is meant to prevent gatherings of Israelis adjacent to the border barrier which would interfere with ongoing routine IDF activities, and stated that the move was not directly taken as a countermeasure to the fighting in Syria.

There have been numerous instances of “spillover” of mortar shells and machine gun fire as rebel forces, regime forces and Islamic State (ISIS) duke it out over the border in the Syrian side of the Golan.

In April, Iranian officials reportedly told the visiting Syrian defense minister to heighten tensions against Israel and open a war front on the Golan Heights, in a bid to further spread the regional influence of the Shi’ite Islamic regime. The call was followed by several more “spillover” incidents.

Experts have revealed Iran is spending $35 billion a year to prop up Syrian President Bashar al-Assad’s regime, and is likewise deploying thousands of its troops in the country.

The reason for this is that Iran needs to maintain a route of access through Syria to the Mediterranean by which it can supply weapons to Hezbollah and strengthen its growing regional influence.