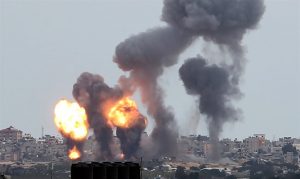 Israeli warplanes bombed a Hamas weapons factory in the Gaza Strip Friday morning, in retaliation for rocket attacks from the Gaza Strip, like reported by inn.com.

An IDF spokesperson confirmed Friday that the Israeli Air Force bombed a site used by Hamas for assembling weapons, saying the strike was in response to rocket attacks from the Gaza Strip.

Six rockets were launched from Gaza towards Israel just after 5:00 a.m. Friday morning.

Authorities say all six rockets landed in open areas. No injuries or damage were reported.

The rocket fire came after IDF aircraft and tanks hit Hamas underground infrastructure and a Hamas post in the Gaza Strip.

The attack was carried out in response to the continued firing of incendiary balloons from the Gaza Strip toward Israeli territory.

“The IDF conducts an ongoing assessment of the situation and acts firmly and decisively against any attempt at terrorist activity against the citizens of the State of Israel and the violation of its sovereignty,” the IDF Spokesperson’s Unit said.

On Thursday, at least 30 fires broke out in communities located near the Gaza border as a result of the incendiary balloon terrorism.