You are here: Home / MidEastGulf / IDF: Arab-Israeli paraglides into Syria from Golan Heights 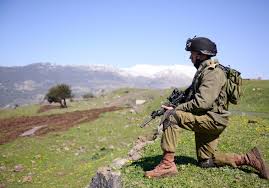 An Arab-Israeli was spotted paragliding across the Golan Heights border into Syria by an Israeli Defense Force watchtower Saturday afternoon, according to a statement posted on an official IDF Twitter account.

The IDF statement says that its initial investigation suggests the person crossed intentionally.

A Jerusalem Post article quoted a IDF spokesman as saying that the paraglider, a 23-year-old resident of the town of Jaljulia, crossed the border in order to join a militant group in Syria.

“We believe he planned this move to the other side, and joined a group there,” Brig.-Gen. Moti Almoz told reporters during a conference call, the Post reported.

Another IDF statement said that Israeli forces are still trying to ascertain the individual’s intentions.

The Golan is regarded internationally as occupied territory despite Israeli annexation. It is home to 41,000 residents, including Jews, Druze and Alawites.

Israel captured the territory from Syria during the 1967 Israel-Arab war, and it was eventually annexed.