You are here: Home / MidEastGulf / IDF and Russian army officials to meet on October 5 for military coordination in Syria 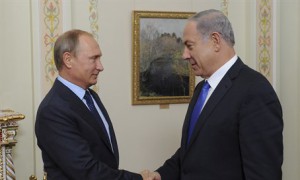 Officials in Jerusalem revealed on Thursday that the joint team coordinating military action between the Israeli and Russian armies on Syria will hold its first discussions in less than two weeks.

The team was established during a high-profile meeting held in Moscow earlier this week between Prime Minister Binyamin Netanyahu and Russian President Vladimir President.

Netanyahu expressed concern over the deployment of Russian soldiers in Syria, including both considerable ground and air forces.

In an effort to prevent accidental clashes between IDF units and Russian forces operating in Syria, Netanyahu told Israeli reporters after the meeting, that he and Putin had “agreed on a mechanism to prevent such misunderstandings.”

During the first official meeting, scheduled to take place on Monday, October 5, the joint team will focus primarily on coordinating air operations near Syrian’s border with Israel.