You are here: Home / Mediterranean / IDF: 160 terrorists eliminated in Gaza 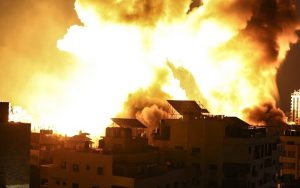 Roughly 160 terrorists in the Hamas-ruled Gaza Strip have been killed thus far in Israel’s ongoing counter-terror operation, dubbed Guardian of the Walls, according to an IDF spokesperson Tuesday.

The IDF also said that it destroyed 9.4 miles (15 kilometers) of terror tunnels built by Hamas in its massive “metro” tunnel network.

“Overnight, we destroyed about 15 kilometers of the fourth section of the Hamas ‘metro’, though we still have a great deal of work left in the tunnels in Khan Yunis and Rafiah.”

A total of ten people have been killed in Israel since last Monday, with over 300 injured in rocket attacks.