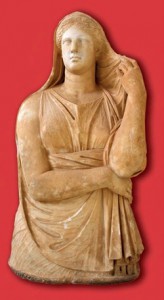 A “red list” of Libyan antiquities at risk during the current civil war was published by the International Council of Museums today, 15 December. This comes just five days after Isil-backed militia reportedly moved into Sabratha, which contains an important Roman amphitheatre, although the deliberate destruction of antiquities by extremists has not occurred in Libya on the same level as in Iraq and Syria.

With two rival governments, one in Tripoli and the other (recognised internationally) in Tobrouk, the country is in “chaos”, according to the Paris-based council of museums. The purpose of the Emergency Red List of Libyan Cultural Objects at Risk is to alert customs officials, police forces and the art trade to potentially looted antiquities. Funded by the US Department of State, it was drawn up by Vincent Michel, director of the French Archaeological Mission in Libya, with assistance from other international experts.

The publication illustrates the type of antiquities that are now vulnerable, although it is not a list of specific objects that have been looted. Among the examples are pre-historic rock art, stones inscribed with Greek, Punic, Latin and Arabic writing, sculptures, “veiled” female funerary busts, wall paintings and mosaics, sarcophagi, jewellery and coins.