You are here: Home / MidEastGulf / ‘I cannot fight jihad today as I have a bad back’: Sick notes written by ISIS fighters are uncovered 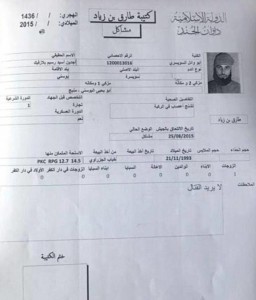 Sick notes written by ISIS militants desperate to escape the front line have revealed jihadis are not turning up to fight because of headaches, sore feet and bad backs, like reported by dailymail.co.uk.

As the terror group is flushed out of areas of Iraq, coalition forces have uncovered documents that belong to the Tarek ibn Ziad battalion that operates in Iraq.

They show Arab and European terrorists in the Middle East are pleading to be discharged from duty so they can return to their home countries with the most feeble of injury claims.

Among the excuses for not fighting on the front line include stating cerebral pains, knee spasms, backaches and heel soreness, according to Iraqi News.

Tarek ibn Ziad is understood to be a terror cell made up of mainly European fighters tasked with carrying out attacks in the Middle East.

It was formed by a terrorist named Morrocan Abdelilah Himich, who goes by the named of Abu Suleyman al-Fransi, according to The Arab Weekly.

He is understood to have played a part in the November 2015 Paris attacks.

The terrorist group have come under huge pressure from US-led forces in Mosul, their self-appointed caliphate.

The stronghold has been widely regarded as their Iraqi based since they seized power back in 2014, but their position is weakening.

Iraqi and Kurdish troops in coalition with allied soldiers are advancing on the city, and have already killed 3,300 ISIS fighters since the offensive started in October.

The pressure has resulted in jihadis turning their back on the group, and incidents of infighting have also been reported as a number of senior leaders have fallen.

The most recent was that of ISIS’ chief executioner nicknamed Abu Sayyaf, who was stabbed to death near the city on Sunday night.

He was dubbed one of the terror groups scariest decapitators and was paraded in their sick videos for his huge frame.

He was also said to be leading ISIS in the Nineveh State, where he was killed by an unknown group who swarmed terrorist territory.

Abu Sayyaf, translated to mean ‘father of swordsmith’, is also the name for an ISIS branch in the Philippines synonymous with beheadings and kidnappings.

The executioner, who died in the al-Dasawa region in the western side of the city of Nineveh, was renowned for collecting the heads of his victims and dumping them in the same infamous hole in the region of al-Khasafa.