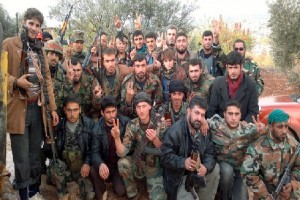 A Free Syrian Army (FSA) brigade joined the Syrian Democratic Forces (SDF) on Thursday. The SDF is an alliance of Kurdish, Arab, Assyrian and Armenian militias that have been fighting the Islamic State (ISIS) in northern Syria.

In a press conference in Hasakah city, the Free Officers Union announced that they were deserting the FSA’s ranks and joining the SDF. Their representatives expressed a strong aversion to Islamism.

“We are now witnessing the gradual collapse of the Muslim Brotherhood-linked [rebel] groups after their cooperation with Turkey,” Deputy Chief of Free Officers Union, Hussam al-Awak, said “Those groups have been fighting the Syrian people on behalf of Turkey. They’ve been implementing the Turkish agenda in Syria instead of fighting for the people’s freedom.”

“From now on we’ll be working together with the SDF to continue [our] revolution against terror and tyranny,” al-Awak said.

“We have forces in [Syria’s southern] Qalamoun region and different parts of the country’s northern region. We cannot provide further information about our upcoming operations and movements,” al-Awak added.

“Today’s press conference is held to announce the defection of a group of military leaders from the FSA after deep rifts […] about their agenda. Those leaders and their fighters, headed by Commander Hussar al-Awak, are joining our SDF ranks,” Silo said.

“This is the largest group of fighters joining [the SDF],” Silo told ARA News. “With the presence of these highly trained and professional military leaders and fighters, the Syrian Democratic Forces will continue its progress and liberate all areas held by ISIS terrorists.”