You are here: Home / MidEastGulf / Hundreds of Hezbollah fighters arrive in Northern Hama to hit terrorists back 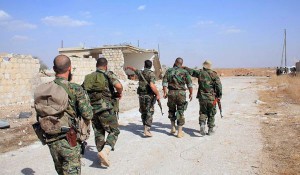 Military sources said a large number of the Lebanese Hezbollah fighters have arrived in the Northern and Western sides of Ma’ardes to launch an imminent joint operation with the Syrian Army troops to beat back terrorists from the towns and villages in Northern Hama.

“Ready-to-fight forces of Hezbollah are coordinating the processes of a large-scale operation with the Syrian army men to liberate the town of Souran and Taybat al-Imam from terrorist groups’ occupation,” the sources said.

Reports said earlier today that Syrian military forces continued to advance against the terrorist groups in Northern Hama and captured a key town along the highway to Aleppo after hours of non-stop battle.

The Syrian soldiers inflicted major casualties on the militants and beat them back form the small town of Ma’ardes.