You are here: Home / Europe / Hundreds of Germans have flocked to Islamic State, dozens have died fighting 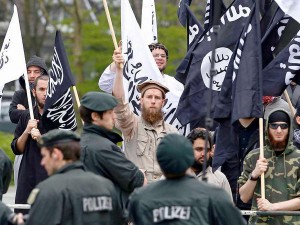 Nearly 700 German extremists have travelled to Iraq and Syria to fight for their idea of a so-called Islamic State and the trend is on the rise, German authorities said.

According to Germany’s domestic security agency, the Federal Office for the Protection of the Constitution (BfV), about 680 extremists from Germany have so far travelled to the Middle East to fight alongside ISIS.

Hans-Georg Maaßen, the agency’s director, “The stream to the combat zones continues unabated (and) the brutal propaganda of the Islamic State attracts more.”

The BfV is one of three major federal intelligence agencies in Germany. The agencies mention about 7,300 Salafists in Germany; the fighters are recruited from their ranks. Their number has risen tremendously during the last few years: in 2011, only 3,800 Salafists were known to authorities.

About a third of the militants have returned to Germany, some with fighting experience. “Salafists want to establish an ‘Islamic State’ in Germany too!” Maaßen repeated several times.  “The Islamist scene is increasing constantly. This leads also to a larger breeding ground for jihadism.”

The President of the Federal Office for the Protection of the Constitution (BfV), Hans-Georg Maassen, said he fears that radical Islamists want to establish their own state in Germany.

Maassen told the Frankfurter Allgemeine that the growth of the Islamist scene in Germany is “unrestrained”. He said:

“The breeding ground for jihad is growing too. Salafists want to establish an Islamic state in Germany.”

His committee report, published on Wednesday found that ISIL is making great use of media and social media in its ‘cyber jihad’ campaign. It said this included the use of “shocking images” as an element of “psychological warfare.” Maassen said he fears that this will be extended to a “fight against infidels on the virtual battlefield.”

Prominent preachers like Pierre Vogel or “Sharia Police officer“ Sven Lau propagate the Salafist movement in Germany, even though they officially refuse to support violence. Another German citizen fighting for the Islamic State is Denis Cuspert, better known as Deso Dog. In a video-message recently published he threatened German public by saying: “Actions were delivered in France, in Germany the sleepers are waiting.”

Germany, which is providing Kurdish Peshmerga with training and weaponry, fears an attack by radical militants on its own soil. Just recently a German spokesperson for ISIS, Christian Emde, told journalist Jürgen Todenhofer: “We will definitely return, and that will not be with friendliness or something like that, it will be with our weapons and our fighters.”