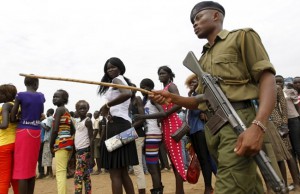 Warring forces in South Sudan have abducted as many as a thousand more child solders in the latest abuses in the 18-month long civil war, military monitors said Thursday.

It blamed notorious militia commander Johnson Olony, a rogue ex-government general with a track record for press ganging children to fight, who joined rebel forces in May.

Olony “carried out forcible recruitment of an estimated 500-1000 youth, many of whom were children aged between 13 and 17 years,” the report said, adding the hundreds were taken “during house-to-house searches” in the northern villages of Kodok and Wau Shilluk.

“The youth were then taken to training camps,” the report said.

The U.N. children’s agency estimates there are at least 13,000 child soldiers fighting in the country, and said last week that fighters have carried out horrific crimes against children.

Recent attacks include castration, rape and tying children together before slitting their throats. Others were thrown into burning houses.

Civil war began in December 2013 when President Salva Kiir accused his former deputy Riek Machar of planning a coup, setting off a cycle of retaliatory killings across the country that has split the poverty-stricken, landlocked country along ethnic lines.

Two-thirds of the country’s 12 million people need aid, according to the U.N..

The IGAD report also said government troops had deliberately fired on some 30,000 civilians sheltering in a U.N. peacekeeping base in Upper Nile’s state capital Malakal in May.

“It was evident that it was deliberate and sustained,” the report read, adding that there was “no evidence” opposition forces were in the area.

“It is clear that firing by government forces was carried out with blatant disregard for the safety of civilians,” it added.

Over two dozen armed forces – including government soldiers and allied militia backed by Ugandan soldiers on one side, and a range of rebel factions on the other – have been battling it out for the last 18 months despite numerous ceasefire agreements.

IGAD warned that “military commanders at all levels are held accountable for the conduct of the forces under their command.”