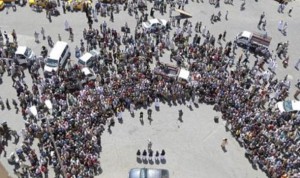 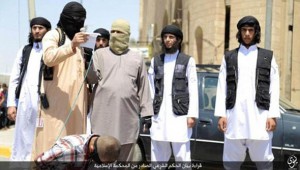 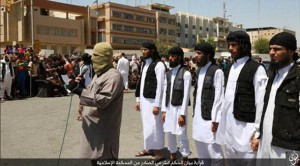 The horrific new images show the levels of depravity reached by the terror group, who are known for killing homosexual people by throwing them off buildings.

This latest insight into the workings of the extremist organisation shows hundreds of people gathered in the main street of Mosul in Iraq.

They are joined by ISIS jihadis, all dressed in black and white, as a thug reads out a statement which condemns a man to death for allegedly being gay.

In an attempt to publicise the brutal murder, the thug masquerading as a judge can reportedly be seen making his speech through a microphone system to the blood-thirsty crowd.

The majority of the people gathered were apparently carrying weapons – with even small children wearing ISIS clothing also seen in the street.

A final picture from the heinous scene shows the broken and motionless body of the man on the concrete floor after being pushed from the top of a building.

It is unclear how ISIS discovered the sexuality of the man.

This latest sickening act is not the first time homosexuals have been targeted by the depraved regime.

The shocking murder comes following the separate execution of two other men – again for being accused by ISIS of being gay.

Killing them in the same despicable way, pictures from the terror group show two young men lying motionless in a pool of blood on the floor.

While at the beginning of July, ISIS carried out the same punishment by throwing four men to their deaths for the “crime” of being homosexual.

A clip showed the accused being hurled head first off a four-storey building in the Iraqi province of Fallujah.

It came following a deadly suicide bomb attack in the southeastern Turkish city of Suruc which killed 32 people.

While no group has claimed responsibility for the attack, several reports have linked the atrocity to ISIS.