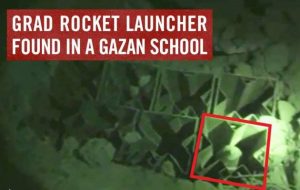 Deadly rocket and mortar fire on Israeli cities by Palestinian militant groups during a May conflict in and around Gaza constituted war crimes, Human Rights Watch said Thursday. https://www.hrw.org/news/2021/08/12/palestinian-rockets-may-killed-civilians-israel-gaza

The New York-based rights group analyzed attacks from Gaza that resulted in the deaths of 12 Israeli civilians and injuries to dozens more.

Rockets that misfired or fell short also killed or wounded “an undetermined number of Palestinians in Gaza,” the group said, with at least seven Palestinian civilians killed.

The rockets were fired during an 11-day conflict that saw Israel pound Gaza with airstrikes as militants in the blockaded enclave fired more than 4,000 rockets towards Israel.

Israeli strikes killed some 260 people in Gaza, including militants, while munitions from Gaza killed 13 people in Israel, including a soldier.

The report comes a day after the UN Palestinian refugee agency UNRWA condemned “the existence and potential use by Palestinian armed groups” of tunnels under its schools in Gaza, saying they placed pupils and staff “at risk”.

The agency issued its statement following a demand by Israel’s ambassador to the United Nations, Gilad Erdan, to freeze its funding after Israeli public television reported Hamas blocked UN inspectors from inspecting a tunnel near an UNRWA school.

Human Rights Watch previously accused Israel of war crimes for strikes that killed dozens of civilians despite “no evident military targets in the vicinity” during the conflict that ended with a May 21 ceasefire.

In Thursday’s report, the rights group cited statements by Gaza’s Islamist rulers Hamas and other militant groups announcing barrages of rockets at Tel Aviv and other Israeli cities

After one such statement, shrapnel from a rocket killed a 63-year-old Israeli woman south of Tel Aviv. Another rocket killed a father and his teenage daughter in Lod, about 20 kilometers (12 miles) from Tel Aviv.

“Under international humanitarian law, or the laws of war, warring parties may only attack military objectives,” Human Rights Watch said, adding, “launching such rockets to attack civilian areas is a war crime.”

The group suggested the International Criminal Court, which is investigating allegations of Israeli war crimes, should include “unlawful Palestinian rocket attacks against Israel, as well as unlawful Israeli attacks in Gaza.”

In April, Human Rights Watch accused Israel of committing the crime of “apartheid” by seeking to maintain Jewish “domination” over Palestinians and its own Arab population, an allegation Israel firmly rejected.