You are here: Home / Senza categoria / How TV can help fight Islamic State

In response to an executive order from President Donald Trump, U.S. military leaders have presented the White House with recommendations for destroying the Islamic State’s self-proclaimed caliphate in Iraq and Syria, like reported by politico.com 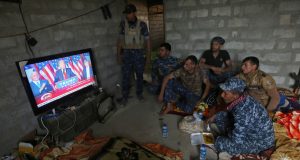 While the Pentagon’s immediate focus is on the battlefield, its plan to defeat ISIS is reportedly much broader, recognizing the need to utilize “all elements of national power” to attack the key sources of ISIS’s strength, including its ideology.

This recognition is not new. More than a decade ago, while the United States was focused on destroying al Qaeda militarily, the bipartisan 9/11 Commission wrote that the terrorist group was just one manifestation of “a radical ideological movement in the Islamic world… that will menace Americans and American interests long after Osama Bin Laden and his cohorts are killed or captured.” The commission concluded, “Our strategy must match our means to two ends: dismantling the Al Qaeda network, and prevailing in the longer term over the ideology that gives rise to Islamist terrorism.” Substitute ISIS for Al Qaeda and the 9/11 Commission’s recommendation is just as valid today.

In fact, ISIS’s very existence is proof that we didn’t heed those warnings. The U.S. has still not dedicated anything close to the resources necessary to prevail against extremist ideology. To do so requires nothing less than a full-scale generational commitment to engage, support and empower moderate forces in the Muslim world, amplifying the voices of all those who seek to advance values such as pluralism, the rule of law, women’s rights, critical thinking, reason and innovation. One of the most impactful ways to amplify these courageous voices is through comprehensive partnerships with the largest, most credible media outlets in the Muslim world.

“In war,” Napoleon famously said, “four hostile newspapers are more to be feared than a thousand bayonets.” The extremists understand the continuing truth of this adage. They devote tremendous energy and resources to a communications strategy that exploits all media platforms, traditional and new. There are reportedly more than120 extremist or sectarian television channels in the Middle East, indoctrinating and inciting tens of millions of viewers through the airwaves. Referring to both Sunni and Shia extremism, Bahraini Crown Prince Salman bin Hamad Al Khalifa has said, “Satellite channels unseen by Western audiences and free of either its restrictions or regulations, broadcast, with far greater impact than the internet, an almost continuous message of intolerance and venom to the ignorant and susceptible.”

Fortunately, many of the Middle East’s most popular television channels are led by visionaries who understand that the best response to extremism is programming that inspires and empowers their predominantly young audiences. For example, during the last two Ramadans – sweeps month in the Muslim world—the leading Pan-Arab channel MBC aired a hugely popular anti-ISIS comedy, Selfie, which reached tens of millions of viewers. The show’s leading actor, famed Saudi comedian Nasser Al Qassabi, previously starred in Tash Matash, the long-running TV show that regularly challenged conservative taboos in Saudi society.

Millions of young Middle Eastern viewers want programs of this kind—drama and entertainment that reflects their cultural storylines and can compete with the best television anywhere in the world. Unfortunately, programs like Selfie are the exception. In a region facing multiple wars, failed states and low oil prices, TV advertising rates are low and profitability is constrained. Channels are unable to develop their writers. Producers and directors are starved for more opportunities.

The region’s creative community has asked for America’s help in addressing this shortfall. They want mentorship in the storytelling and scriptwriting skills that make American shows so successful. They want to develop television and film with better pacing and more drama. And they want to know how America’s creative community has helped galvanize Americans and their allies to meet some of the world’s great challenges.

None of this is primarily a job for the U.S. government. But Washington can play an important supporting role. The Trump administration can provide catalytic funding to help compensate for the limitations of the Middle East television market. It can convene patriotic American investors who understand the national security stakes and will help fund creative content that may not earn huge returns (at least initially). It can prod our Fortune 100 companies to provide a range of support that will help defray costs. All this will help stimulate new partnerships between creative artists in the US and the Middle East, but with indigenous actors in the lead and Americans in a supporting role. In light of the tremendous popularity and credibility of America’s television and film industry, these partnerships will be perceived as a significant net gain for the creative community in the Middle East.

The United States still remains unmatched in its ability to foster collaboration between people of different societies and tell stories that inspire and unite in common purpose. The president and key members of his team understand the power of media to shape culture. We need to draw on these strengths and support those within the Muslim world who are working courageously and tirelessly to win the war within their civilization. Only by helping amplify their voices can we end the cycles of violence that wrack the Middle East and endanger the world.