You are here: Home / MidEastGulf / How Turkey’s entry into the anti-ISIL campaign might save the Islamic State 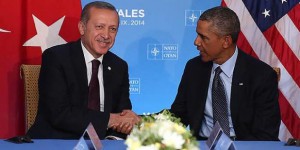 When Turkish Air Force F-16s struck Islamic State targets in Syria, it signaled that NATO’s only Middle Eastern member had finally joined the campaign against the proclaimed caliphate on its borders. The attacks were backed by an agreement to allow U.S. aircraft to launch strikes from Turkish air bases, a logistical prize denied for nearly a year. Now Turkey is promising a “comprehensive battle” against the Islamic State. On face value, the agreement seems to be a step forward in the campaign to drive the Islamic State from northern Syria. But the simultaneous news that Turkish airstrikes against the Kurdistan Worker’s Party (PKK, a designated terrorist group that seeks Kurdish democratic autonomy) in Turkey and Northern Iraq had collapsed the ceasefire between the government and that Turkish forces had shelled the People’s Protection Unit (YPG, the umbrella group for Syrian Kurdish militias affiliated with the PKK) illustrates the huge costs associated with Turkish entry into the war. Indeed, over the long-term, this development could cripple the U.S.-led air campaign to degrade and destroy the Islamic State.

To be sure, there are benefits that come with the Turkish entry into the campaign. The most obvious is the use of Turkish airbases for strike missions, as opposed to solely unarmed intelligence, surveillance, and reconnaissance (ISR). If the United States can transfer strike aircraft from bases in the Persian Gulf to Incirlik Air Base, they will save more than 1500 miles round-trip on sorties in northern Syria. This would allow aircraft to carry more weapons and would lighten the strain on a heavily burdened air refueling network over Iraq, significantly increasing the American ability to project power in northern Syria and Iraq.

What’s more, the Turkish entry into the campaign came in tandem with an internal crackdown on Islamic State networks. While F-16s were bombing Islamic State positions in Syria, local authorities were rounding up suspected affiliates of the group and searching their properties. Turkey has long been an easy point of entry for foreign militants to enter Syria and link up with Islamic State forces with the apparent disinterest (or, as some allege, complicity) of border officials. If Turkey is able to cut the flow of militants and supplies through its borders, it will be a serious blow to the Islamic State’s manpower and materiel, especially in tandem with a more effective, Turkish-supported air campaign. Together, these two blows are likely to seriously weaken the Islamic State’s positions in northern Syria, and open the door for a decisive Syrian Arab and Kurdish attack towards the caliphate’s de facto capital of al-Raqqa.

But while the door can be opened for these forces, the same Turkish intervention may prevent either side from walking through. The entry of Turkish forces will also likely split U.S. priorities in airborne capabilities, as Turkey does not have necessary ISR and rescue capabilities for an extended campaign over or in Syria or Iraq. Past experience has shown that when the Turkish government allows the use of their bases, harsh restrictions and conditions are imposed, and support for the Turkish air campaign one such likely condition. The Turks’ secondary aim of containing the Kurdish advance may even drive a deliberate drain on American airpower dedicated to YPG support. If the U.S. military is forced to divert resources to the Turks, it may be forced to deny the YPG persistent overhead close air support, a crippling disadvantage that the Islamic State has proven adept at exploiting in the past. Without the expected and relied-upon air support, the YPG will find themselves certainly unable to advance and possibly unable to hold their current positions.

The Turkish entry also threatens to leave the YPG not just unable, but also unwilling to take the offensive. After repeated Turkish attacks on their positions, the YPG face a serious threat to their rear while being asked by their American allies to advance further into the Arab-populated Syrian heartland. Their military vulnerability is worsened by a new political vulnerability: Turkey’s declaration of a “safe zone” free of and from the Islamic State as well as the forces of Bashar al-Assad. In the context of Turkish President Recep Erdogan’s open declaration that he will “never allow” the creation of a Kurdish state, the safe zone seems to be meant as a wedge driven between the Kurdish-controlled cantons of northern Syria. Denying the Kurds the short-term goal of linking their forces along the Turkish border and the long-term goal of independence is a huge blow to the morale and motivation of the America’s most aggressive ground partners fighting the Islamic State.

So does the Turkish entry into the campaign, on balance, help or hurt? In the short term, it is doubtful that the Turkish crackdown on the Islamic State’s supply lines will be able to outweigh the loss of YPG air support. The Islamic State has shown flexibility in its supply lines, while the YPG have been completely unable to advance when airpower is unavailable due to the massive imbalance in forces. The YPG’s morale drain may be even more striking; the Iraqi army has spent the last two years showing that even the most heavily-supported, well-equipped forces cannot hold their own without a compelling cause. Together, the loss of support and morale will stop the YPG offensive and will likely cause a reversal.

A Kurdish retreat or defeat in northern Syria would be devastating for the long-term course of the war. First, it hands a major public relations victory to the Islamic State after they were beaten out of Kobane by the YPG and American airpower. Second, a YPG halt will deny American airpower one of its best points of attrition in the campaign against the Islamic State. The Kurdish offensive forces the Islamic State to reveal its positions, mass its forces, and call up heavy equipment to defend territory. Massed personnel, vehicles, and equipment are easier to target with airstrikes, and make each attack more deadly and devastating to Islamic State forces. Third, the Turkish policy of splitting the Kurds of Syria may succeed, preventing the YPG from linking its forces in northern Syria. If the YPG are not successful in linking their hard-won territory in the north, it is doubtful that the U.S. will be able to convince them to advance towards al Raqqa, losing a valuable chance at a crippling blow to the Islamic State.

The endgame of the war is also hard to imagine if the negative consequences of Turkey’s intervention are not mitigated. Without a threat to al-Raqqa, the Islamic State can pour reinforcements into Anbar, Bayji, and other Iraqi hotspots, ending slow advances by the Iraqi Security Forces and Shia militias, and allowing the Islamic State to resume a dispersed, difficult to target posture on both sides of the border. The United States will be forced into an overarching strategy of attrition instead of supporting maneuver towards the enemy capital, binding it to a course that will be simultaneously crippled by the Islamic State’s ability to disperse in the face of airstrikes. Even if the U.S.-led coalition is somehow successful under these constraints, the long-term prospects for stability may well be shattered if the Turkish-Kurdish conflict creates a power vacuum that will allow ISIS or a similar group to rise in the future, just as it did during the onset of the Syrian civil war.

If the entry of Turkey into the war is on balance damaging for the coalition’s chances in its campaign against the Islamic State, the United States must determine how to salvage the situation. First, on a tactical level, the United States should supplement, not replace, YPG air support. This will require refusing, in some cases, Turkish demands for support on their own campaigns in favor of the Syrian Kurds, a difficult but necessary foreign policy stance. Doing so will allow the United States to continue to support YPG advances, creating and destroying massed enemy formations. Next, the United States should be more permissive in its support for existing Syrian opposition groups, to include Islamist groups that reject the Islamic State, work with U.S.-affiliated groups, and do not associate with al Qaeda. Turkey already supports Islamist groups in Syria, and is likely to turn to them to enforce its Islamic State-free zone. By supporting select Islamist groups, the United States may be able to carve out a role for its incipient, directly-backed rebel umbrella group. If these U.S.-backed forces can hold some territory in the safe zone, they may be more willing to allow the transfer of Kurdish troops and supplies than the existing Islamist groups.  At the same time, the United States should do everything that it can to open some kind of negotiations between Turkey and the Kurds on the future of northern Syria. It may not be possible to solve the Turkish-Kurdish conflict, but even the opening of negotiations is critical for tactical cooperation and YPG morale.

The best thing that the United States can do to mitigate the Turkish entry into the war, however, is to be ready for when it stops. The above stances are politically difficult for the Turkish government, and it is possible the Turkey will simply pull its support of the campaign in lieu of agreeing to them. The United States must be in a position to seamlessly continue its efforts without Turkish basing, in order to preserve YPG territory in northern Syria. Even more, maintaining the infrastructure for a campaign from non-Turkish bases gives the United States a stronger negotiating position, making it more likely that Turkey will agree to its proposals. If it does so, then the Turkish entry into the campaign can be leveraged into increased airpower, and the hope of a decisive advance on al-Raqqa can be maintained.

Correctly recognizing the limits of the Turkish entry into the air campaign will be the enabler that U.S. planners need to prioritize a new, critical ally over a NATO partner. If the United States defaults to its treaty partner, it will cripple its own campaign against the Islamic State and the long-term prospects for peace. It is a difficult foreign policy stance, but one that the United States must take if it truly wants to degrade and destroy the Islamic State.