You are here: Home / Analysis / How Turkey pushed for Azerbaijan’s war on Armenia 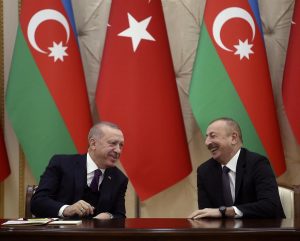 Evidence of Turkey’s role in pushing Azerbaijan to war against Armenia is growing. As more videos emerge of Syrian mercenaries sent by Ankara to fight against Armenians emerges, it becomes clear that the logistical effort to send these fighters would have had a tail stretching back months, like reported by jpost.com..

In addition Turkey’s media and government have hyped the use of the Bayraktar B2 drones against Armenian armored columns, illustrating that for Turkey, this is profitable for its arms industry. The media-industrial complex in Ankara also mobilized false news stories as the war began to try to link it to “terrorism” against Turkey.

It is possible to see hints of the planning in Ankara behind the war through a look back at how the war developed and how it was pushed prior to the outbreak of fighting on September 27.

The first piece of evidence is that Turkey’s ruling AK Party and its regime media has a habit of inventing stories about the “PKK” prior to launching invasions of other countries. Turkey claimed the Kurdistan Workers Party (PKK) was threatening it from Afrin in northwest Syria before invading the area in 2018.

In reality there were never attacks on Turkey from Afrin, and the area was controlled by the Syrian People’s Protection Units (YPG), a group that Ankara alleges is the same as the PKK. However the same Ankara allowed ISIS members and other extremists to transit areas it controls, so the idea that Turkey’s motivation was actual threats from the YPG is not borne out by evidence.

As part of Ankara’s pattern of inventing “PKK” threats to justify military operations, it has invented new threats every few months, despite no attacks, to justify attacking Syria in October 2019 and bombing Iraq in the spring and summer of 2018. Around 300,000 Kurds have had to flee their homes, and many Yazidi villages have been destroyed and women assassinated and kidnapped during Ankara’s invasions, where it uses Syrian mercenaries to carry out war crimes. The country claiming a “terrorist threat” thus ethnically cleansed and depopulated much of northern Syria without one terror attack on Turkey.

On september 25 Ankara ordered its pro-government media to produce stories of “PKK” threats in Armenia. Daily Sabah, one of many pro-government newspapers, ran a headline claiming “Armenia transfers YPG/PKK terrorists from Syria and Iraq to the occupied Nagorna-Karabakh to train militias.” Turkey is the largest jailer of journalists so there was no critical media that could push back against this government narrative. Now, on September 25, Ankara had its casus belli to support the war it had planned.

Ankara’s attempt to push Azerbaijan to war with Armenia over the disputed area of Nagorna-Karabakh goes back to July when there were clashes. A key to backing Azerbaijan was arms sales. Azerbaijan indicated it would buy Turkey’s Bayraktar drones in June 2020. Between July 12 and 16 there was fighting. On July 17, Turkey’s Defense Industries president Ismail Demir said that the industry would back Azerbaijan. UAVs were one aspect; however articles also noted ammunition, missiles, electronic warfare systems and even vehicles.

Turkey has a modern and successful arms industry. Azerbaijan, wealthy from energy exports, would help Turkey’s economy as its currency declined. The Turkish president’s son-in-law also runs the company that makes the Bayraktar drones. So Ankara and the country’s leader would benefit.

In fact, Azerbaijan’s drone arm was historically made up of Israeli drones. Turkey was clearly using the war to showcase its weapons. According to Nordic Monitor, which is critical of Turkey’s current policies, Baku and Ankara had deepened defense ties in recent years with some $2 billion in sales in 2019.

Prior to the war, Turkey and Azerbaijan held joint military training between July 29 and August 5. On August 13, Turkish defense minister Hulusi Akar journeyed to Baku. The training and visit underlined the close coordination.

The clashes in July had been very small compared to the massive conflict that would erupt on September 27, in which hundreds of military vehicles would be destroyed on both sides, thousands of casualties would be suffered and cities on both sides would be shelled. In short, a real war was brewing and Ankara was pushing for it in August and early September.

Turkey’s Akar said that Ankara would continue to support Azerbaijan in its struggle ‘for liberation of the occupied lands.” He emphasized that Turkey had a population of 83 million. The message was clear: With only three million Armenians, the Armenian army was no match. The military drills and drone purchases helped set the stage for war.

In September, Turkey began to explore the possibility of using Syrians to fight in Azerbaijan. This would give Ankara some role in the upcoming conflict. It would also give it cover as Turkey, a member of NATO, could claim that these were “volunteers” who simply want to support their friends. Turkey would focus on recruiting Turkmen from Syria who had already joined the Turkish-backed Syrian National Army or were affiliated with units that were once linked to the Syrian rebels. It had already recruited thousands of these men to fight in Libya.

On September 23, the first reports emerged of Syrians being sent to Azerbaijan. They had been recruited in mid-September or earlier. In September, Turkey was busy pushing a crisis in the Eastern Mediterranean. It had sent its navy with a research vessel called Orus Reis to harass Greek islands. It was stoking tensions with Greece, Cyprus and France.

In late August, Turkey sent F-16s to harass the Greek air force and reportedly used the Russian S-400 to track the Greek planes on August 27. In mid-September the Oruc Reis paused its mission. On September 22 the EastMed gas forum received further support as Israel, Egypt, Cyprus, Greece and Jordan began working more closely. The US Secretary of State also visited Greece and Cyprus in September, arriving in Cyprus on September 12 and Greece on September 27, the same day that the war broke out.

The timing of Pompeo’s visit and Azerbaijan’s moves now appears to have been fueled by Ankara. Syrian sources sent me details on the deployment of Syrians to Azerbaijan on September 23. These included video and photos of the volunteers.

According to the Syrian source, the men were part of the Sultan Murad unit and they were transported via Afrin to Turkey and then to Azerbaijan. They would be paid between $500 and $1,200 dollars a month, they said. Ankara had put out statements on September 21 after an Azerbaijani soldier was killed.

Four days later, the Turkish government coordinated statements supporting Azerbaijan. The clashes broke out early in the morning and Baku said its forces had retaliated after coming under attack. However, within days, Azerbaijan said its goal was to “liberate” all of Nagorna-Karabakh. That showed that the conflict was not likely sparked by mistake.

Turkey also indicated it would support Baku and even support it militarily if asked. Turkey’s president and foreign minister both expressed support for Azerbaijan early on September 27, indicating that Ankara was either extremely quick to put out prepared statements, having expected fighting, or had been in coordination. Turkey’s foreign Minister Mevlut Cavusoglu held conversations with his counterparts the same day.

The coordination of the military sales, recruitment of mercenaries and prepared statements, as well as Ankara’s shift from pushing a crisis with Greece in August and early September, to pushing Baku toward war, illustrate that at least part of the war effort was determined by Ankara. Now the tempo of conflict has been reduced, since Russia sought to mediate – and Ankara has renewed is focus on threatening Greece.