You are here: Home / Senza categoria / How to take the Internet back from Islamic State: countering extremist propaganda online 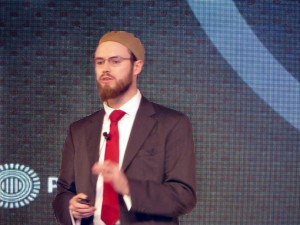 Last week, in the ballroom of the St. Regis Abu Dhabi, Chris Blauvelt climbed onstage with three other Americans to accept first prize in the world’s inaugural Haqqathon. The tech-centered event, whose name is a play on “haqq,” the Arabic word for “truth,” took place on the fringes of the Forum for Promoting Peace in Muslim Societies, a conference of scholars from around the globe. For the past several years, the group has focussed primarily on quelling violent extremism, with limited success.

Last year, it issued a fatwa against the Islamic State in Iraq and al-Sham (ISIS), which did very little to stop young Muslim men from taking up arms in Syria. The decision to include two dozen hackers in the 2015 conference was, in part, an acknowledgment of that failure. “We need to relate more to people on the ground,” Zeshan Zafar, the forum’s young executive director, told me. “The scholars aren’t resonating. We need to meet the youth where they are—online, in social media.”

From the stage, Blauvelt cued up an ISIS propaganda video. The audience, composed mostly of middle-aged men in crisp white dishdashas, craned their necks for a better view as the screen filled with slow-motion images of young men on the battlefield. “Imagine, if you are a sixteen-year-old boy, how cool this looks,” Blauvelt said. “It’s like a Hollywood movie and you’re the hero.” He paused and then said heavily, “I know this, because I was nearly one of them.” When Blauvelt was growing up, in a small farm town in western Massachusetts, indoctrination was analogue.

At the time, the nearest mosque was more than an hour away. He and a friend converted to Islam when they were sixteen, then fell in with a local man, a follower of fundamentalist Wahhabism, who offered to be their teacher. Blauvelt told me that he learned about medieval Islamic notions of disbelief and war and loyalty before even learning how to pray properly. ISIS initiates its followers in the same way but on a far greater scale; now a confused Muslim teen-ager need only turn on his smartphone or a computer to find a kindred spirit.

In his suit and tie and brown taqiyah, Blauvelt hardly seemed like an erstwhile jihadi. And that was precisely the point: most of the young men who travel to Syria to join ISIS don’t initially look the part. The group’s preferred demographic is Muslim men between the ages of fifteen and twenty-five who have been disenfranchised in some way—lost a job or dropped out of school. ISIS makes these young men feel guilty about staying home while their fellow-Muslims die overseas, then tries to persuade them to come make amends.

According to a recent report by J. M. Berger and Jonathon Morgan, of the Brookings Institution, the group has deployed an army of users—between five hundred and two thousand of them, with multiple accounts—who tweet extremist messages and update their Facebook pages around the clock. Berger and Morgan found that the average ISIS-supporting account has about a thousand followers, which gives the group substantial reach. And it extends beyond Twitter and Facebook, to include lesser-known services such as Kik and Ask.fm.

How do you fight that? According to Blauvelt’s team, you start with something called Champions of Islam, a social-media site that encourages people to upload photos of everyday Muslim heroes. (There is an accompanying app in which young users can win medals and points for emulating principled behavior; an act of kindness, for instance, earns you bronze.) In his demonstration of the concept, Blauvelt used the example of Husain Abdullah, who plays safety for the Kansas City Chiefs.

After explaining to the assembled scholars that football in America is different (“you’re allowed to use your hands”), Blauvelt told them about Abdullah—how he left the N.F.L. for a year at the height of his career to go on the hajj to Mecca, and how, when he returned, he became the first person to perform sujood, to prostrate himself before God, on American national television. (Abdullah had intercepted a pass from Tom Brady, the quarterback for the Patriots, which you might remember even if you aren’t Muslim.) “This is the kind of role model young Muslims need, the kind of person Champions of Islam will focus on,” Blauvelt said.

At the Haqqathon, five teams, including Blauvelt’s, were given two and a half days to come up with a concept and turn it into a running prototype. As a result of their win, Blauvelt’s group will receive money from the forum and mentoring from Affinis Labs, a Virginia-based business incubator, to help them make Champions of Islam fully operational. The members of the team, after all, aren’t full-time software developers. Blauvelt is the C.E.O. of LaunchGood, a faith-based crowdfunding platform based in Michigan; Abdullah Antepli is an imam at Duke University; Asma Uddin is the founder and editor of altMuslimah, an online magazine that focusses on gender in Islam; and Amanda Quraishi is a social-media strategist from Texas. A second team also won some money, for their idea of an interactive Web site that allows young Muslims to ask scholars about sex, marriage, and intimacy.

Clearly, none of this will banish ISIS from the Internet anytime soon. But, as Shahed Amanullah, a tech entrepreneur and co-organizer of the Haqqathon, told me, it’s a start. “The world’s largest Muslim community is not Indonesia or any particular country—it is the community of Muslims who are gathering online and exchanging ideas,” he said. “This was all developed in just two days. Imagine if young Muslim talent like Chris and his team had two weeks, two months, two years.”