You are here: Home / MidEastGulf / How to apply to the Islamic State’s first Nursing School 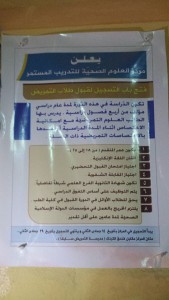 ISIS has allegedly announced their new nursing school, which they plan to open soon, is now accepting applications, wrote Vocativ. The ad was published on Twitter by a group of anti-ISIS activists in the city of Raqqa, the so-called “ISIS capital” in Eastern Syria.

According to the ad, the ISIS nursing degree will take one year to complete, consisting of four academic semesters. The ad lists the admission requirements for prospective students: