You are here: Home / MidEastGulf / How the U.S. Navy will beat Iran’s naval mines in the Persian Gulf 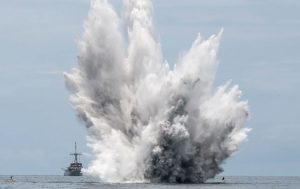 The integrated system, as described by Raytheon developers, combines sonar, an RF antenna, an acousting modem, an Electro-Optical/Infrared camera and a highly specialized explosive. The multi-pronged process, according to Andy Wilde, Raytheon Director of Strategy and Business Development for Undersea Capabilities, hinges upon a recently integrated high-tech forward-looking sonar known as AQS 20, like reported by nationalinterest.org.

Sea mines lurk beneath the surface of the ocean with explosive power, often buried in the sea floor, denying enemies entry into combat-critical waterways. They can explode on impact or use sensor technologies for proximity detonation. They are shallow, deep-water, and open ocean weapons that are inexpensive, available and increasingly deployed in critical waters by both rogue nations or great powers.

This is why mines a persistent and long-standing threat to U.S. Navy surface ships, submarines and small boats, are becoming much more advanced as newer sensing and explosives become available.

With this in mind, the Saudis, British and Americans all detected, tracked and destroyed mine targets in the Arabian sea in a recent series of training operations.

The exercises included “mine hunting simulations where participating units practiced detecting and classifying training aids shaped like mines while following standardized mine hunting procedures,” according to a U.S. Navy report on the training.

It goes without saying that the Arabian Gulf is an area of huge significance to the U.S. and allied Navies, given its vital strategic and commercial functions regarding both security issues and the free flow of global commerce. The training and interoperability exercises are doubtless, at least in part, aimed at protecting the Strait of Hormuz, a narrow strip of water bordering Iran in the Arabian Gulf.

The United States has long been concerned about Iranian placed mines and small boat attacks that could disrupt, or even attack, U.S. maritime operations in the area. Furthermore, America and allied nations have, in recent years, expressed substantial anxiety about the proliferation of both shallow and deep water mine threats. Not only are they inexpensive and growing in number, but they are also becoming more sophisticated with advanced sensors and newer methods of detonation.

The coordination between the three countries participating in the training included U.S. and UK mine-countermeasure patrol ships and, quite likely, advanced sensors, drones and possibly unmanned surface vessels.

The U.S. Navy has been moving quickly to innovate emerging mine-countermeasures technologies, accelerate development of newer, high-tech systems and conduct testing and training operations with new platforms. The service has also, in recent years, been working on new mine countermeasure strategic documents.

Some of the more recent innovations include Northrop’s AQS-24 which uses underwater laser side-scanning. Speaking in January 2020 at the Surface Navy Association Symposium, Captain Danielle George, Mine Warfare Programs Manager, said the Navy plans to deploy the AQS-24C as soon as this year. The AQS-24C, described by George as a Volume Search Sonar, is an upgrade to existing “A” and “B” variants. It is a cylindrical vehicle towed through the water beneath an Unmanned Surface Vehicle (USV). USVs, quickly becoming more autonomous, can be remotely operated by a ship or shore station miles away.

“Think of it as being able to double the speed you can operate at, because we are pinging at the same rate but we go twice as fast. We figured out how to do that. We still get the benefits of synthetic aperture sonar. We get the benefit of going 18 knots and we maintain the benefit of high resolution. We maintain the same resolution over the full speed range of the vehicle,” Gene Cumm, Director of International Mine Warfare Programs, Northrop Grumman, told TNI earlier this year.

The Navy is now also rapidly developing and testing the Barracuda Mine Neutralization System. This new technology uses an emerging, layered system consisting of a forward-looking AQS 20C sonar system, networking buoy and an undersea sensor-explosive known as Barracuda.

The integrated system, as described by Raytheon developers, combines sonar, an RF antenna, an acousting modem, an Electro-Optical/Infrared camera and a highly specialized explosive. The multi-pronged process, according to Andy Wilde, Raytheon Director of Strategy and Business Development for Undersea Capabilities, hinges upon a recently integrated high-tech forward-looking sonar known as AQS 20. Having recently delivered its tenth AQS 20 sonar to the Navy, Raytheon developers are moving quickly to meet a growing Navy demand for its long-range sensing technology, Wilde told TNI earlier this year.

Significantly, the Barracuda not only uses cameras to “see” and “confirm” the existence of a mine, but also itself functions as its own explosive able to destroy or neutralize the mine. The explosive, Wilde described, is highly specialized for the mission, saying additional detail was not available for security reasons.