You are here: Home / MidEastGulf / How the Houthis control Yemen 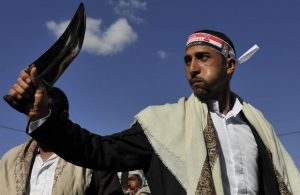 The Houthis are a small group of people who live in the north of Yemen, and they have been nursed by Iran to fight against Saudi Arabia and the Sanaa government as part of the Iranian project of planting regional agents similar to Hezbollah in Lebanon, like reported by arabnews.com.

The leadership of the Houthis has been affiliated to the Iranian Revolutionary Guard Corps (IRGC) for more than 20 years — not recently as some people believe.

Over time, the Houthis became similar to other Iranian armed groups in the region who are trained in the use of arms, organization and propaganda. Iran chose the title and the slogan for the group. Ansarullah is the name of the Houthi militias, and they reiterate the same Iranian daily slogan: “Death to America, Death to Israel, Curse on the Jews, Victory to Islam.”

But the Houthis are different from the Lebanese Hezbollah in that they are just a small group in Yemen, less than 5 percent of the population.

The Iranians have supported the Houthis with the help of the more developed Hezbollah, which manages Houthi affairs in Yemen. It benefits from its long military, social and propaganda experience in Lebanon and seeks to prepare the Houthis for controlling Yemen.

That is why the Houthis have shown more advanced activities in using weapons, including ballistic missiles, in the past three years.

The Houthis conduct a conscription policy in the areas under their control and do not hesitate to execute those who refuse to join their militia — or the families of defecting conscripts.

A Yemeni friend told me how the Houthis appoint local leadership in the areas they occupy and force conscription on boys between 11 and 17 years old, executing anyone who rejects the policy as part of an intimidation process to subjugate these tribal areas, which were not controlled by any authorities before.

My friend told me about the Houthis’ propaganda activities, which employ the same tactics as the IRGC by convincing children that by fighting Saudi Arabia they are fighting America and Israel. He also said that the Houthis distributed small radio sets because of the lack of electricity and TV sets in the countryside. The Houthis have closed 15 newspapers and 19 private and public TV stations, leaving only two loyal TV channels.

Iran transferred its experiences in conscription and propaganda to their Houthi followers in Yemen, and they trained them in funding  methods and creating other financial resources for the militia. The availability of funds is the secret behind the continuation of Houthis in their fight. Most of these are collected through checkpoints, which are used to levy taxes on individuals, vehicles and goods in areas under their control. They control the port of Al-Hodeidah, which is the main sea lane in Yemen, and all fuel-selling points.

Lebanese Hezbollah members took care of organization and planning for the Houthi group, which is structurally underdeveloped. Most of its middle leadership is illiterate. The most important challenge, given the small size of the group, is the spreading of influence through coalitions, control and conscription, and recruiting the youth using ideology and letting them intimidate people in the areas under their control.

The Houthi militia is very similar to Daesh group. Both of them are terrorist organizations, both in ideology and practice, and their philosophy is based on intimidation and total submission to the leadership.

We have already seen how Daesh in Syria and Iraq, despite its small size, managed to control densely-populated towns and big cities with millions of residents, like Mosul. It took an international military effort to liberate these towns and cities.

Taking on the Houthi organization with aerial bombardment only, and without a clear approach that studies the nature of the organization and its activities on the ground, will not eliminate the danger.