You are here: Home / Analysis / How the end of the arms embargo disastrously splits Iranian terror, nukes 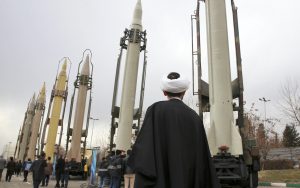 October 18 may turn out to be a day which will live in infamy. The falling of the conventional arms embargo against Iran is not just dangerous because of the SU-30 attack aircraft and defensive S-400 anti-aircraft missile system which Iran may now purchase from Russia, like reported by jpost.com.

It is not just dangerous because it legalizes and could streamline weapons deals between the Islamic Republic and its proxies in Lebanon, Syria and Gaza.
October 18 may turn out to be a day which will live in infamy.

The falling of the conventional arms embargo against Iran is not just dangerous because of the SU-30 attack aircraft and defensive S-400 anti-aircraft missile system, which Iran may now purchase from Russia.

It is not just dangerous because it legalizes and could streamline weapons deals between the Islamic Republic and its proxies in Lebanon, Syria and Gaza.

What may be most dangerous about the lifting of the arms embargo is that it could permanently disconnect the issue of Iranian terror from the issue of the ayatollahs obtaining nuclear weapons.

A major premise of the Obama administration’s 2015 nuclear deal with Iran was that separating the issues in the short and medium term was a good thing.

The rationale was that if Tehran getting nuclear weapons could be pushed off for a decade or more with a deal, maybe during that time the regime would moderate, see the benefits of dealing with the West and start to lower its terror footprint.

One can debate whether it was strategically wise to pull out of the nuclear deal in 2018 while Iran was complying with its nuclear limits, as opposed to waiting until the last year or two of the deal to pick a fight, as recommended by former IDF intelligence chief Amos Yadlin and former CIA director Michael Hayden.

But there is no debate that after the deal, Iran promoted terror as much or more in the Middle East and globally as before.
Separating the issues to deal with them one at a time did not work with Tehran.

What the Trump administration has tried to do with its “maximum pressure” campaign is to reconnect the issues.

To date, it has not succeeded.

Iranian terror and provocations in the Middle East may have morphed, but did not go away.

The ayatollahs may have less money to pay Hezbollah and Shi’ites in Syria to build their Shi’ite crescent, but they attacked Saudi oil fields in September 2019 and several British, UAE and other ships.

The Islamic Republic started to violate the nuclear limits in retaliation.

It is unclear whether the maximum pressure campaign without some major change can or would succeed even given more time, and it may soon be out of time.

However, one unequivocal positive of the campaign was that it had reconnected Iranian terror and its nuclear program.

The problem with Tehran was not one line item or another that could be separated, but a package of issues, each of which independently threatened Israel, the Middle East, and down-the-line, other parts of the world.

Without the arms embargo, it will be pressing for Israel to unite a group of countries to press Russia not to sell Iran the SU-30 and the S-400.

Israel will also need to start contingency planning for how to combat the SU-30 in Syria and elsewhere to maintain security on its borders, and for how to overcome the S-400, should the need to preemptively strike any Iranian nuclear facilities come up.

But most importantly, Israel must rethink how to convince whoever is US president in January 2021, as well as the EU and others, that connecting Iranian terror and nuclear weapons is unavoidable.

That the issues can only be solved together and that, in fact, possibly the greatest practical threat of Tehran getting a nuclear weapon, would be expansive and unrestrained Iranian terror.

If the disconnect which was created on October 18 is maintained, whether sooner or in five or 10 years, the world will eventually wake up to an Iran far more deadly than anything it has seen to date.