You are here: Home / MidEastGulf / How much does Russia care about Hezbollah? 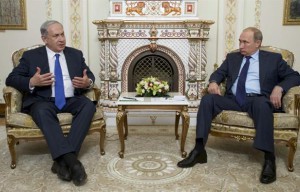 A series of reported Israeli airstrikes over the weekend, allegedly against weapons storage facilities in Syria’s Qalamoun region, raises questions on the limits of cooperation between Russia and Iran in Syria and on Israel’s operational latitude in a Syrian airspace today dominated by the Russian Air Force.

While Russia and Iran are battlefield comrades in defending the regime of President Bashar al-Assad, the Israeli airstrikes suggest that Moscow has little interest in helping its allies protect arms stockpiles that are intended to bolster Hezbollah’s front against Israel.

On the other hand, the limited nature of these latest airstrikes, which did not see a breach of Syrian airspace by Israeli jets, poses the question of how far Israel is prepared to go in Syria to target what it calls “game changing” weapons destined for Hezbollah. Would Israel risk antagonizing Russia by dispatching aircraft directly into Syrian airspace to attack targets closer to the Russian operational core in Latakia Governorate?

The Israeli airstrikes, some of which were reportedly directed against Scud ballistic missiles, were the first such raids since April. They were also the first Israeli airstrikes on Syria since Russia launched its military intervention two months ago to prop up the Assad regime.

The first wave of airstrikes were reported to have been staged on Friday night, with Israeli jets firing stand-off guided missiles from Lebanese airspace to hit an alleged Hezbollah position near Ras al-Ain and the sprawling ballistic missile facility near Qutayfah, home to the Syrian Army’s 155th Brigade. Israeli aircraft have in the past launched their missiles from Lebanese airspace to hit targets in Syria close to the border with Lebanon to avoid Syria’s dense air defense network around Damascus. Both of Friday’s targets were well within the range of Israel’s Popeye and Spice air-to-surface missiles, launched from aircraft above central Bekaa Valley. Security sources in South Lebanon said that 16 Israeli aircraft were detected breaching Lebanese airspace on Friday — an unusually large number.

A second wave of attacks reportedly occurred Sunday evening, again hitting the 155th Brigade facility south of Qutayfah which includes more than two dozen underground missile bunkers dug into the side of a valley. Six Hezbollah personnel were killed in Sunday’s airstrike, according to security sources in Lebanon.

Israel, Hezbollah and the Syrian government have not confirmed the airstrikes and most of the reporting on the raids came from pro-Syrian opposition news sources.

Nevertheless, the pattern of air strikes and the subsequent reporting sources and lack of official comment from the antagonists echoed an Israeli bombing raid in the Qalamoun area in late April.

Israel has struck suspected Hezbollah arms shipments in Syria on 11 separate occasions since January 2013. The Syrian government generally refrains from commenting on raids that occur in remoter areas of the country while denouncing those that cannot be ignored such as the daylight strike against targets in Damascus airport last December. The only military response to past air strikes came from Hezbollah following the bombing of a suspected weapons transfer facility on Lebanese soil south of Janta in the Bekaa Valley in February 2014. Hezbollah subsequently staged a number of small attacks against Israeli troops in the Golan Heights, culminating in the wounding of four Israeli soldiers in a roadside bomb ambush.

Israel has repeatedly said that it will not allow Hezbollah to acquire “game changing” weapons such as ballistic missiles or advanced air defense systems. Given the relative rarity of Israeli air strikes in Syria, it is possible that Israeli intelligence had detected a convoy of weapons preparing to roll out to the Lebanese border and took preemptive action. Hezbollah often uses the bad weather of fall and winter to help mask its arms smuggling activities across the border.

Last month, Moscow announced that Russia and Israel had agreed to establish a “hotline” between their respective militaries to avoid any mishaps and misunderstandings that could arise from having their air forces operating in the same skies above Syria. The agreement coincided with a report in As-Safir on 16 October that Russian aircraft were scrambled two weeks earlier to intercept Israeli jets in North Lebanon that were approaching Syrian airspace.

Russia’s interests in Syria are related to safeguarding the Assad regime in the short-term and consolidating its influence in the country and the broader region in the longer-term. It has a battlefield alliance with Iran, Hezbollah and the Syrian Army and operates a joint operations center in Damascus. The Syrian Army and its allies from Iran, Lebanon, Iraq and Afghanistan are presently engaged in several offensives in northern Syria supported by Russian air power.

But Russia’s interests do not necessarily extend to providing protection for Hezbollah’s weapons stored in Syrian military bases, which, after all, are related to the conflict against Israel and not to Assad’s survival. The latest Israeli raids suggest that Israel does not expect Russia to actively confront its attempts to hit Hezbollah assets in Syria, at least when the attacks are launched from Lebanese airspace and the targets are far from Russia’s operational hub centered on Hmeymim air base south of Latakia.

It is unclear exactly what agreement, if any, has been concluded between Russia and Israel governing the use of Syrian air space.

But any understanding will surely be put to the test if Israel detects “game changing” weapons appearing in Latakia Governorate in proximity to the Hmeymim airbase and chooses to attack them. Israeli jets have staged at least three previous attacks in the Latakia area, one of them against suspected P-800 Yakhont anti-ship missiles. If Israeli jets are dispatched again to destroy advanced weapons consignments in Latakia, it is hard to imagine Russia turning a blind eye to an aerial intrusion on its ‘patch,’ even if the anti-Israel agenda of Iran and Hezbollah is not Moscow’s concern.