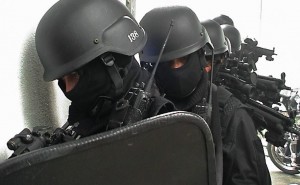 While authorities around the world grapple with thwarting attacks by Muslim militants, counter-terrorism units in both Malaysia and Indonesia have been lauded for curbing dozens of bombing plots and assault attempts aimed at killing scores of innocents, like reported by asiancorrespondent.com

This year alone, Malaysian anti-terrorism police nabbed more than 115 people with links to global Islamist militant groups, preventing at least 14 attempted attacks, while their counterparts in neighbouring Indonesia — also a Muslim-majority country — had foiled at least 15 suicide attacks and bombing plots, with more than 150 arrests, according to various news reports.

Earlier this month, Malaysian police Special Branch (SB) Counter Terrorism Division principal assistant director Ayob Khan Mydin Pitchay, told a seminar on countering extremism at the University of Jordan that the majority of the Malaysian public were unaware of the looming threat of the Islamic State (IS) militants who had planned a series of attacks in his country.

Unlike many countries in Europe, Malaysia has yet to face any major attacks in recent memory, but Ayub Khan said the June 28 grenade attack on an entertainment centre in Puchong in the outskirts of Kuala Lumpur that left eight injured, was a wake up call on the imminent presence of IS.

“Many did not believe that the IS threat is clear and present. I have been talking about IS since 2013, but only after the bombing in Puchong did they (the public) believe it,” Ayob Khan was quoted as saying by national news agency Bernama.

Revealing the shocking figures, Ayub Khan said the Malaysian police force had in total arrested 260 people from various countries for involvement in militant groups; four in 2013, 82 in 2015, and 115 in 2016 as of Dec 16.

Of the estimated 70 to 80 Malaysians who went to fight alongside IS and other militant groups in Syria over the last few years, Ayub Khan said 27 of them had died in the middle-eastern country while eight have returned.

The high ranking official said the arrests and the foiled attempts were owing to the vigilance of his officers who did not compromise on militant-linked activities, even if it was at the expense of arresting one of their security personnel. This was evident with the arrests of 14 soldiers, four of which were highly-trained commandos, and another three policemen for their involvement with IS.

In Indonesia, a Reuters analysis of data shows the elite unit, the Special Detachment 88 (Densus 88), preventing at last 54 plots or attacks in the nation of 250 million people, the world’s fourth largest, since 2010.

About 800 Indonesians have travelled to Syria to join Islamic State and 169 have been stopped en route and deported, according to Indonesia’s national counter-terrorism agency.

In the past two months alone, there have been 40 arrests, and at least six attacks foiled, according to the Reuters study, which collated data with the assistance of Institute for Policy Aanalysis of Conflict (IPAC) staff. At least two of the attacks were planned for New Year’s Eve, police said.

Many of these plots have been linked to IS, with police alleging they were inspired, if not directed, by Bahrun Naim, an Indonesian militant who fled to Syria about two years ago.

“These new homegrown terrorists and the local jihadists have never gone abroad. But with the advent of the Internet age and technologies like social media, it’s easier to make bombs and explosives to do operations,” said a law enforcement source, who spoke under the condition of anonymity because he was not authorized to speak on the matter.

For obvious reasons, officials in both countries declined to elaborate on their methods in curbing militant plots which lead up to scores of arrests and hundreds, or even thousands of lives saved from bloody attacks.

However, an expert in the field, Andrin Raj, the Southeast Asia Regional Director of the
International Association for Counterterrorism and Security Professionals, said the authorities in both countries have vast experience in tackling terrorism and insurgencies, dating back decades.

“Malaysia and Indonesia have long fought guerrilla warfare types of operations and this has lead to highly sophisticated intelligence gathering,” Raj told the Asian Correspondent recently.

“The other interesting thing is that the undercover operations units and the larger security personnel are Muslims themselves and this makes it a lot more easier to infiltrate jihadist organisations unlike the European counterparts.”

Raj said training by British military intelligence group, MI5, and its United States equivalent, following the end of World War II, allowed both Malaysia and Indonesia to develop highly-capable security forces able to detect and curtail threats “without changing mindsets on the levels of security needed to protect their nations”.

Although the counter-terror units in both countries have been successful for the most part, Raj said it was important for them to remain hot on the heels of militant groups, especially in wake of the seemingly unpredictable nature of attacks in Europe.

“The threat is still imminent here as in Europe as terrorists will learn to execute their modus operandi based on the opportunity provided,” he said.

Asked how Indonesian and Malaysian police had been successful in preventing lone-wolf attacks and mass shootings seen in much of Europe, especially this year, Raj said there were many underlying and overlapping factors, but it was important to note that operational targets differ for terrorist groups.

“Thailand, Indonesia and Philippines are highly targeted by Jihadist terrorist groups, and some countries may remain as safe havens to operate.”

Greg Barton, a terrorism expert and research professor in Global Islamic Politics at Alfred Deakin Institute in Melbourne, said Indonesia’s Densus 88 has become better than pretty well any other counter-terrorism group in the world.

“They have had an incredible workload and they have become remarkably good at what they do.”

In the last six years, there has been only one major attack in Indonesia that caused civilian deaths, when assailants hit a Jakarta mall and police post with gunfire and bombs, resulting in the deaths of three Indonesians and a dual Algerian-Canadian national. All four attackers were also killed in the January 2016 attack.

Between 2002 to 2009, there were nine major attacks by militants, leaving 295 dead and hundreds of others wounded.

Since its formation in 2002, the unit has put a premium on clandestine intelligence gathering. Now much of that intelligence work is done online, by infiltrating and monitoring chat rooms, social media and messaging apps popular with militants.

“We built our organization to learn from the enemy,” said a senior counter-terrorism officer who declined to be named.

Created in the aftermath of the deadly 2002 Bali bombings that killed more than 200 people, Densus 88 has about 400 to 500 members, state-of-the-art weaponry and training, said another official. It has received more than $200 million of funding from Western allies such as Australia and the United States.

The unit is headed by a task force, a core of 30 or so senior members, said the Indonesian law enforcement source.

“Many of them possess doctorates and have specialties like psychology and social behaviour,” the source added. “They are not like regular police.”

The black clad, heavily armed members of Densus 88 sometimes seen during raids on suspected militant hideouts make up a small proportion of the unit, officials say.

Far more personnel are dedicated to gathering intelligence in the field and monitoring communications and online activity. There is also a large team of investigators analysing that intelligence and forensically examining explosives and other evidence.

Sidney Jones, the director of Institute for Policy Aanalysis of Conflict (IPAC), said the key to Densus 88’s success lies in its intelligence gathering.

“They know the radical networks and have a good set of informers,” she said. “It is unparalleled in terms of its ability to understand the sources of possible threats.”

Barton said the unit has adopted a unique, “strategic” approach to interrogations that aids intelligence gathering.

Suspects were kept at police stations rather than in jails and allowed to meet their families.

“They sit down and listen to their story,” Barton said. “They get them talking and that’s an effective way of getting intelligence.”

Despite Densus 88’s recent successes, the worry is that the militant threat to Indonesia is mounting as IS fighters return battle-hardened from Syria and Iraq. The ultra-radical group also commands support from some Indonesians who have stayed at home.