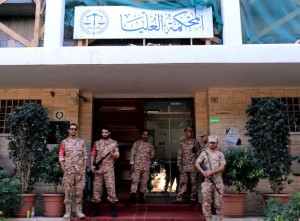 Since the fall of Colonel Gaddafi in 2011, Libya’s government and institutions have struggled to hold the country together. The justice system, in particular, has become a symbol of all that’s wrong with post-Arab Spring Libya.

A video has emerged showing one of Gaddafi’s sons, Saadi, apparently being tortured in jail – this after a Tripoli court sentenced Saif Al-Islam Gaddafi to death in absentia (he remains in jail in Zintan, held by a militia “government” that rejects the administration in Tripoli).

He was condemned to die along with former intelligence chief Abdullah al-Senussi and eight other members of the old regime, who are being held by the Tripoli authorities.

There are worrying questions over all these sentences. Both Saif Gaddafi and al-Senussi were subject to warrants of arrest issued by the International Criminal Court (ICC) in 2011, which Libya chose not to honour – and which the ICC was powerless to enforce.

At a time when the court finds itself under increasing pressure, Libya’s treatment of figures from the old regime is a stark example of the stakes for international justice. It’s also a reminder of how little clout the ICC really has at a time when it’s arguably needed more than ever.

This helped improve states’ own legal standards and practices. Rwanda, for example, abolished the death penalty and introduced new witness-protection measures to pave the way for the international tribunal to transfer cases back to domestic control.

By contrast, the ICC exercises jurisdiction under a principle known as “complementarity”, which means that it can only try a case where the state that has jurisdiction is either unwilling or unable to prosecute.

That principle allowed Libya to challenge Gaddafi and al-Senussi’s cases going to the ICC, since it was willing and able to try them in a domestic court. The defendants, on the other hand, wanted to be tried by the ICC – they were keen to avoid the death penalty (which the ICC cannot issue) and argued they would not get a fair trial in Libya.

Ultimately, the ICC determined that the trial against al-Senussi could take place in Libya, rejecting his defence team’s argument that a state could not be considered genuinely “willing” to conduct proceedings if it failed to respect the accused’s right to a fair trial. Despite those concerns, the Appeals Chamber effectively explained away al-Senussi’s lack of access to a lawyer as being “due primarily to the security situation in the country”.

By contrast, the case against Gaddafi was deemed admissible before the ICC, largely because of Libya’s inability to try the accused, given that Libyan authorities had not been able to secure transfer of Gaddafi to stand trial (and indeed, they remained unable to do so, with much of his trial proceeding in his absence).

In spite of the ICC’s ruling that Gaddafi should be tried in The Hague, and not Libya, the fact that he was never transferred to stand trial illustrates one of the court’s biggest weaknesses: it lacks an independent enforcement mechanism and relies entirely on state co-operation to secure the transfer of defendants to its custody.

This is the problem that has played out in the Libyan case. In December 2014, the ICC found that Libya (which is not a party to the ICC’s founding treaty) had not complied with its requests and referred the matter to the Security Council. The Security Council did call upon Libya to cooperate with the court in May 2015, but in vague terms and without explicit mention of Saif Gaddafi’s transfer.

This is not the first time the Security Council has referred a situation to the ICC and then failed to help the court handle it. In December 2014, the prosecutor criticised the Council’s hands-off attitude towards the situation in Darfur, which it referred to the ICC in 2005, and said that she was left with no option but to “hibernate investigative activities in Darfur”.

Al-Senussi’s case highlights another problem with the ICC: its failure to encourage fair trials.

In its decision on al-Senussi, the ICC interpreted its role in a quite a limited way. It decided that it can only take a lack of judicial impartiality into account where it’s part of a deliberate effort to help the accused evade justice, rather than simply a fact of a flawed justice system.

So by allowing al-Senussi’s trial to continue in Libya despite concerns about the fairness of the process, the ICC has made itself complicit in the resulting sentence.

Some might argue that complementarity means the ICC just can’t fulfil the same moral function as other tribunals. I disagree; the reference to “due process” in the complementarity clause is perfectly ambiguous. It certainly leaves room for the Court to take fair trial considerations into account when it decides whether a case is admissible.

Instead, it’s given its implicit consent for al-Senussi’s death sentence after a deeply flawed trial – another strike against its already tattered reputation.