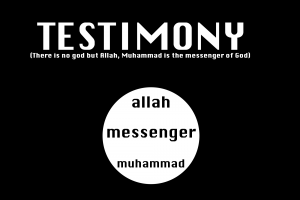 Whether fluttering over the ruins of a captured city in Iraq or Syria, or in the background of gruesome execution videos, the black flag used by the Islamic State group has become an instantly recognisable symbol of modern global jihad.

Along with its slick Hollywood-style propaganda videos, experts say IS has harnessed bygone apocalyptic prophecies and Islamic symbols to carve out a brand even more potent than Al-Qaeda at the height of its notoriety.

The black standard has become so recognisable that “in the public’s mind, any Muslim militant who waves a ‘black flag’ is ISIS,” said William McCants, author of “The ISIS Apocalypse”, which uses an alternative name for the group.
“Like other jihadist groups, ISIS designed its flag based on written reports about the Prophet Muhammad’s flag. But its interpretation of those reports is unique,” he told AFP.

Unlike other Islamic banners that militant groups have used throughout the years, the flag has also become popular with jihadists in different parts of the world such as Libya, Somalia and Yemen.

The flag first appeared online in January 2007, used by IS’s predecessor in Iraq when it was allied to Al-Qaeda to “gather believers under one banner to unite them”.

McCants said the group, which announced the formation of a “caliphate” in 2014 after seizing large parts of Syria and Iraq, “wants to present itself as a state, and states have flags.”

The white text on a black background at the top of the flag is the beginning of the shahada — the Muslim profession of faith — “there is no god but God”.

In the centre of the flag is the prophet’s seal in white containing three words in black: “Allah, Rasul (prophet), Mohammed”, which is meant to be read from the bottom up as the last part of the shahada: Mohammed is the messenger of God.

Some claim Mohammed used the seal on centuries-old letters urging the kings of Ethiopia, Persia, Byzantium, Bahrein and Egypt to embrace Islam, though their authenticity is disputed.

“The Islamic State has succeeded in kidnapping, appropriating a symbol that belongs to all of Islam,” said Asiem El Difraoui, author of the book “The Jihad of Images”.

“They created a logo with an insanely powerful force, and completely trivialised it,” he said.

The shahada figures on several national flags — such as that of Saudi Arabia — but never on a black background and always in elaborate calligraphy.

Several experts say the deliberately basic scrawl on the IS standard is an effort to make the writing look old, instead of designed on a computer.

There is no mention of the black standard in the Koran, but only in sayings and prophecies attributed to Mohammed known as hadiths.

It is mentioned in several hadiths that talk about the end of times and the return of the Muslim saviour Mahdi, who will fly the flag as he leads an army to victory against the enemies of Islam.

“If you see the black flags coming from Khorasan, join that army, even if you have to crawl over ice, for this is the army of the Mahdi and no one can stop that army until it reaches Jerusalem,” reads one such hadith.

According to the hadiths the prophet fought at different times brandishing white or black flags.

The Taliban in Afghanistan use a white banner inscribed with black writing.

The black flag became prominent after it was used by hardline revolutionaries who overthrew the Umayyad caliphate in the eight century.

“Since this time, the image of the black flag has been used as a symbol of religious revolt and combat, that is to say, jihad,” Difraoui said.

For IS, who see themselves as fulfilling Islamic prophecies about the end times, the flag “still carries an almost mythical dimension” as a portent of “the apocalypse… the final battle between believers and the forces of evil.”