You are here: Home / Senza categoria / How Islamic State terrorists distort the meaning of Ramadan to justify violence 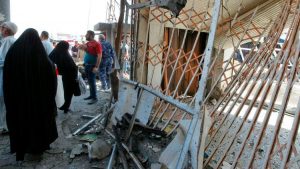 For Muslims, Ramadan is the holiest month of the year. Families travel to mosques for nightly prayers, give charity to those in need and wake up before dawn to break fast — traditions meant to encourage self-reflection, compassion and piety. Ramadan is in short a chance to become closer to God.

Those who show righteous behavior during the holy month will be rewarded manifold in the afterlife, the Koran promises, like reported by latimes.com .

But in recent years, Islamic State leaders have twisted the meaning of Ramadan to encourage their followers to kill civilians. This year’s Ramadan, which ends June 24, has been mired in violence. Islamic State has claimed responsibility for a string of high-profile attacks that killed hundreds and injured many times that.

Islamic State markets the killing of so-called infidels any time as a spiritual opportunity. But in the group’s warped logic, doing it during Ramadan offers even greater rewards.

That idea is a perversion of the widely held belief in Islam that God holds good deeds done during the holy month in higher regard.

“Extremists like the Islamic State turn the spirituality of Ramadan upside down and deploy it as weapon of choice against real and imagined enemies,” said Fawaz Gerges, a professor of international relations at the London School of Economics and author of “ISIS: A History.” “They claim that the Islamic community face an existential threat and say that the fate of the Islamic community rests on their individual effort.”

Those susceptible to Islamic State propaganda find the group’s call to arms during the holy month particularly appealing, he said. “Some young men and women conflate their spirituality of Ramadan with armed and violent jihad.”

“It is no wonder in the past few years Ramadan has seen more spectacular attacks carried out by followers and supporters of Al Qaeda and the Islamic State,” he said.

The attacks this year started on May 22, four days before Ramadan, when a suicide bomber in Britain killed 22 people at an Ariana Grande concert in Manchester.

Then in the early hours of May 30, a bomb exploded in Baghdad outside an ice cream shop, killing 10 people. Hours later, a second bomb went off in a different part of the city, killing 12 more.

The next day in Kabul, Afghanistan, a suicide bomber killed at least 90 people on a bustling shopping street.

On June 7, assailants went on a shooting rampage inside Iran’s parliament building in Tehran and attacked a shrine to the Islamic Republic’s founder. The death toll was 17.

In all, Islamic State has claimed responsibility for 267 attacks this Ramadan, according to the SITE Intelligence Group, an independent organization that researches terrorist groups.

It’s unclear how many of the attacks were ordered and directed by Islamic State and how many were carried out independently by people inspired by the group’s extensive propaganda on social media.

And earlier that month, Islamic State encouraged its followers to carry out knife, gun and vehicle attacks in a poster written in Arabic and English that it published on Nashir News Service, which is the group’s channel on Telegram.

“Kill the civilians of the crusaders, run over them by vehicles,” it reads. “Gain benefit from Ramadan.”

The word “crusader” in this context refers to people who do not agree with their extreme ideology.

“By hijacking this annual holiday, they’ve inspired fear and anxiety years in a row,” said Bruce Hoffman, director of security studies at Georgetown University. “That’s how it generates their power. Terrorism is as much about violence as it is about the perceived threat of continued violence.”

Andreas Krieg, an assistant professor at King’s College London’s department of defense studies, said one of the first instances of Islamic State propagating its perverse view was a 2014 YouTube video in which it referenced the ancient Battle of Badr.

The battle occurred in the year 624 and was a pivotal moment in early Islamic history. Despite being heavily outnumbered by their enemies, the prophet Muhammad and his followers defeated the non-believers and helped spread Islam in what is now Saudi Arabia.

Jihadists today perceive today’s standoff with the non-believers as modern version of that ancient battle. Islamic State is currently fighting for its survival as it loses territory in both Iraq and Syria.

Extremists believe there are victories to be won during Ramadan, and that martyrdom for the cause will be greatly rewarded in the afterlife.

In an audio message released before its start last June, a spokesman called for more violence during the holy month. “Ramadan, the month of conquest and jihad,” said Abu Muhammad Adnani, who has since been killed. “Get prepared, be ready … to make it a month of calamity everywhere for the non-believers.”

And that they did.

Omar Mateen shot and killed 49 people in a nightclub in Orlando, Fla.; attackers killed more than 40 people at Istanbul’s Ataturk airport; and at least 250 people died in a bombing in Baghdad.

For the vast majority of Muslims, however, violence is antithetical to Ramadan. And a large number of those on the receiving end of such violence are Muslims, highlighting the heinous nature of Islamic State.