You are here: Home / MidEastGulf / How Islamic State operates in Iraq’s disputed territories 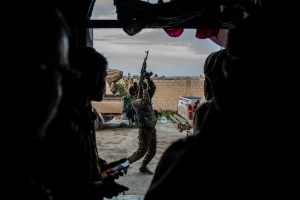 In an interview with French media this month, Kurdistan Region of Iraq Prime Minister Masrour Barzani said there is a “great possibility” that ISIS will stage a comeback in Iraq, especially in territories under dispute between the Kurdistan Regional Government (KRG) and the federal government in Baghdad, like reported by jpost.com.

Near the town of Makhmour, in one of the disputed areas, local Kurdish peshmerga soldiers think the prime minister is correct.

“Daesh is past the stage of making preparations,” Col. Srud Barzanji told The Media Line, using the Arabic acronym for ISIS. “Now, they are ready.”
Amid sectarian tensions, the US-Iran conflict and political upheaval, ISIS activity appears to be increasing in Iraq’s disputed territories.
‘They exist and do operations’

ISIS swept through northern Iraq in 2014, taking the large city of Mosul, oil-rich Kirkuk, Makhmour and other areas. The Sunni Islamist extremists lost their last territory in 2017, following a joint Iraqi, Kurdish and US-led international coalition effort against them.

Since then, ISIS has continued to carry out bombings, kidnappings and other small-scale attacks. The group is particularly active in disputed territories like Makhmour. Kurdish forces took these ethnically and religiously diverse areas from ISIS in 2014. The Kurdistan Region voted overwhelmingly for independence in a referendum held in September 2017, following which Iraqi federal forces retook these territories.

That led to some areas becoming relatively ungoverned, creating a security vacuum that allowed ISIS to thrive.
There have been several incidents in the disputed territories so far in February. ISIS gunmen killed four Kurds in a Kirkuk province village. ISIS also released two kidnapped men in Garmiyan, near the border with Iran, whom it had kidnapped last year. In Makhmour, ISIS gunmen opened fire on a camp housing Kurdish refugees from Turkey, killing a guard.

“It means they exist and do operations,” Col. Barzanji said of the camp attack.
US forces temporarily paused operations against ISIS in Iraq following the American drone strike that killed the commander of Iran’s Islamic Revolutionary Guard Corps, Maj. Gen. Qasem Soleimani, in Baghdad on January 3, according to a US Defense Department report on ISIS. His death was preceded and followed by attacks by Iran-backed fighters on US forces and assets, including the embassy in Baghdad.
Two days after Soleimani’s death, the Iraqi parliament voted to expel US troops from the country. Notably, Kurdish and Sunni parliamentarians did not participate in the vote, a first reading on the legislation.

However, the Iraqi military announced that joint operations resumed in February, following an anti-ISIS raid in the western Anbar province.
‘Many bombs happen you don’t see in media’
Just outside Makhmour, Barzanji leads peshmerga soldiers at the Black Tiger camp – named after their division. They have a base atop a mountain in the Qara Chokh range, where ISIS gunmen hide in caves between Kurdish and Iraqi positions. The area around the base is rural, with green fields lush from the rainy northern Iraq winter.

The peshmerga fighters keep ISIS hardware they captured in battle at the base, including mortars and armored trucks ISIS used in suicide attacks.
Barzanji said ISIS’s movements show the Islamists are ready to carry out a major attack again.
“Sometimes we find bags of women’s clothing,” he said. “This means their women are coming back to them.
“Many foreign fighters came from Syria to Iraq,” he added.

Kurdish and Iraqi media cover ISIS activity, but many things go unreported, according to Barzanji.
“Many bombings happen that you don’t see in the media,” he said, referring to an improvised explosive device attack in the village of Aliava earlier this month.
“Sometimes Iraq [federal forces] defuses bombs,” said Barzanji. “They want to show that the situation is quiet, but it’s not true.”
An Iraqi army spokesman in Nineveh province, where Makhmour is located, was not available for comment.

In addition to Iraqi, Kurdish and coalition forces, Kurdistan Workers’ Party (PKK) fighters from Turkey operate in the Makhmour area and control the refugee camp that ISIS attacked. Turkey regularly bombs PKK targets in KRG territory.
‘ISIS lacks the capacity to do too much harm’

Some analysts believe that the Kurdish prime minister has been exaggerating the ISIS threat for political reasons in recent interviews with Western media. In terms of security, the KRG benefits from the US troop presence in Kurdistan. The American consulate in Erbil, the KRG capital, is the US government’s only fully functioning consular presence in the country following the December attacks on the embassy in Baghdad. This helps the KRG, which controls its borders and government independent of Baghdad, to show it is safer than the rest of Iraq.

Other analysts have countered that the ISIS threat was ignored in 2014, allowing the Islamists to wreak havoc.
David Witty, a former US army colonel who advised the Iraqi Counter Terrorism Service, said ISIS was not carrying out major attacks yet.
“KRG has been saying this for a while,” he told The Media Line. “ISIS attacks have increased, but nothing too significant so far.”
Baghdad and southern Iraq are currently gripped by anti-government protests decrying corruption, Iranian support for Baghdad and poor public services. ISIS sees this as an opportunity; hence the increase in attacks, according to Witty.

“I think ISIS is trying to take advantage of political and social turmoil in Iraq, but lacks the capacity to do too much harm,” he said.
‘Daesh trying to exploit lack of trust’

ISIS takes advantage of ethno-religious tensions in Iraq that have not gone away with the Islamists’ defeat. In the Mosul area, for example, people from many Muslim and Christian communities fear the Iran-backed armed groups known in Arabic as Hashd al-Shaabi.
The Hashd, also known as the Popular Mobilization Forces (PMF), are mostly Shia Muslim groups formed in 2014 by religious edict to fight ISIS. Many receive material and political support from Iran, and they have Sunni, Yezidi and Christian units as well. The Hashd proved effective in fighting ISIS, and now have representation in parliament and largely control Mosul – a predominantly Sunni Muslim city that was the largest under ISIS control.
How things go in Mosul and other liberated areas will determine whether ISIS can rise again, Witty said.

“The danger is the Iraqi government’s lack of action in liberated areas that might cause more alienation,” he said. “Rebuilding, continued PMF presence, lack of security, central government distracted” are all relevant factors, he added.
One Iraqi analyst in Baghdad said that ISIS knows Iraq’s disputed territories and the Mosul area better than the government, allowing it to exploit tensions.
“Daesh knows demographics very well, perhaps better than officials,” Diyari Salih, a frequent contributor to Iraqi media outlets, told The Media Line.

There are several communal controversies in the Mosul area, and the north of Nineveh province where it is located has many towns under dispute between Erbil and Baghdad. One issue is local opposition to and fear of the Hashd. Another is concern that demographic change in favor of the Shia is taking place.
ISIS can exploit opposition to the Hashd and sectarian tensions in Mosul and the disputed territories, Salih said.

“There is a troubled relationship among the residents of these areas with military authorities and the Hashd,” he said. “Daesh is trying to exploit the lack of trust between communities and the lack of trust in the political system.”
Salih calls the disputed territories an “Iraq in miniature.” The area is home to people from all of Iraq’s ethnic and religious communities and is in the middle of the country; there will be no peace in Iraq until the area’s conflicts are resolved, he said.

“Security in Iraq and even its territorial integrity depend on the level of stability there,” said Salih.
Only when residents of the disputed territories live harmoniously will ISIS be unable to thrive there, he said.
“A culture of tolerance, a culture of peaceful coexistence, social justice and a strengthening of the state’s position in the disputed territories,” said Salih. “This is an essential entry point for ending any future Daesh threat to the area.”