Use of weaponized drones, do-it-yourself armoured vehicles and a well-planned internet strategy have given Islamic State an unprecedented edge, according to livemint.com 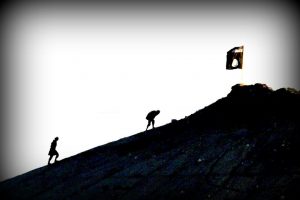 In September last year, a coalition airstrike targeting IS (Islamic State or Islamic State of Iraq and Syria) around the town of Mayadin in Syria killed Abu Salman, Abu Muadh al-Tunisi and Sajid Farooq Babar working with the terrorist group. All three men were involved in weaponizing commercial drones for Islamic State in order to offer game-changing aerial support in a then fast-expanding war in Syria. This was the first instance since the Sri Lankan civil war of a terrorist group looking to set up an air-wing, and this time it was much easier.

The rise and fall of Islamic State has altered the modern battlefield beyond just the caliphate. Use of weaponized drones, do-it-yourself armoured vehicles and an immensely well-planned and executed internet strategy to spread propaganda worldwide have more than often given the terrorist group an unprecedented edge.

In January, Russia’s main airbase in Syria’s Latakia region came under attack by crude drones, allegedly by Shiite militias who had taken a leaf from Islamic State’s operational book. These drones were able to penetrate billions of dollars worth of radars and drop crude bombs on the facility, damaging tens of Russian aircraft. This air warfare has also led to the realization of the need for “low-cost” global air response that goes beyond just the Syrian theatre, altering how we view air forces from the perspective of counter-terrorism.

Access to cheap air power and drones is beginning to challenge traditional notions of warfare. Case in point, the Brazilian Embraer A-29 Super Tucano, a propeller plane originally designed as a trainer, is proving to be one of the most efficient and affordable air power tools for countries like Afghanistan, Brazil, Egypt, Nigeria, the Philippines, Indonesia and is under consideration by the US for its light attack requirement. The same airframe can theoretically work for reconnaissance, attack missions, close air support and training, substantially reducing the complexity and cost. Fighter jets on the contrary are expensive to buy, keep fuelled, maintain and have little loiter capability over a battlespace.

Does the proliferation of cheap manned combat aircraft change the air-power landscape in any way? No. But it is indicative of aspirations of countries, including in India’s neighbourhood, for combat air power. For example, Sri Lanka, Myanmar or Bangladesh’s investments in combat aircraft indicate “prestige” buys not aligned towards existing domestic terrorism/insurgency threats. Furthermore, the proliferation of cheap armed Chinese drones to countries like Pakistan is likely to have a cascading impact on India’s security calculus, as the Pakistani military can pass low-cost drone technology on to its state-sponsored terrorist outfits with ease.

From India’s perspective, the military’s cost of protecting itself tactically against drones is set to rise. Any complacency in recognizing the potential of small commercial drones because of size of payload will likely prove expensive.

What might such an attack look like? An insignificant amount of high explosives flown into an ammunition dump can ignite the explosive potential of a target. Critical infrastructure like radars and communications are soft targets. Defending against drones is extremely difficult: they have very low signatures and widely varying flight characteristics. Data link jamming, hardening of soft targets, GPS (global positioning system) jamming and an effective air defence network will be key to thwarting any such threats.

Purely from a counter-terrorism perspective, the re-building of the Afghan air force is a perfect example of how low-cost threats often require low-cost solutions mixed with the latest technologies. For Kabul, the A-29’s light, single-engine low-cost airframe combined with the fact that the premier adversary, the Taliban, does not have anti-aircraft capabilities, works for both its own strained resources and the US also keeping its costs down. In Afghanistan of course the use of both traditional air power and “shock and awe” air power has not yielded the desired results against the Taliban. However, the A-29 combined with drone strikes has managed to dent both the Taliban and the emerging threat from Islamic State Khorasan Province (ISKP) in restive regions such as Kunduz. Previously, Afghanistan used militarized Cessna Caravan aircraft for these roles; the same aircraft used to fight the Taliban is also used to transport cattle in Australia, showcasing the crossover flexibility of such platforms. The A-29 has also been given to countries like Lebanon by the US, albeit as “observation” aircraft, but largely to give it more teeth in limited counterterror capabilities.

Such changes in modern warfare brought in predominantly by Islamic State’ use of drones needs attention in India as well, which not only has to contend with the possibility of two-front war with nuclear armed states, but also has internal insurgencies that were dubbed by former prime minister Manmohan Singh as the biggest threats to domestic peace.

The possibilities of non-state militant actors arming themselves have increased beyond the traditional methods we understand under the umbrella of guerilla warfare. Access to these technologies may today be just one click away and hold the potential to considerably increase the ability of terrorists and states to exert tactical pressure. New Delhi must wake up to these changing dynamics in time.