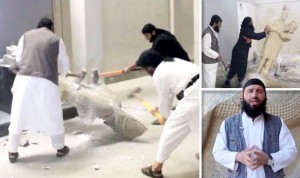 The so called Islamic State (Isis) is distinct from other apparently similar movements, like al-Qaeda and the various Islamist groups which the civil wars in Syria and Iraq have generated. It claims to have revived the ancient caliphate, with pretensions to the leadership of the entire Muslim world.

But how legal and viable are these claims? And how do they justify them?

This is a difficult question to answer. Islamic law offers no generally accepted theory of who the caliph should be, what his (and it is always a he) functions should be and indeed whether a caliphate is really necessary for the political and spiritual health of the Muslim community.

The Islamic State, as well as being a murderous terrorist organisation which has invented new and ever more fiendish ways of attacking those it sees as its opponents, is also, in a way, an intellectual project and this intellectual justification is an important reason for its appeal among the Sunni Muslim community.

The theorists who write about caliphate in its online periodical Dabiq are concerned to prove that their idea of caliphate is firmly based in the early history of Islam. For IS, and for many other Sunnis, the actions of the Companions of the Prophet (essentially anyone who had known, met or listened to Muhammad) were the perfect examples of Muslim practice. It is to their practice that Muslims today should turn if they want to discern God’s will about the way the politics of the Islamic community should be conducted.

This means that a close examination of actions of these early generations in the half-century or so which followed the death of the Prophet in 632 CE is more than just an academic historical enquiry, of interest only to scholars and their students. It is rather a guide to contemporary life and an insight into that most fundamentally important of all questions which confront the faithful, how to live a Godly life on earth and so ensure a place in heaven, the jinna or garden which looms too large in modern Muslim discourse about martyrdom and self-sacrifice.

The obvious problem with this approach is to find out what these early heroes of Islam really did. There is no shortage of what claims to be accurate information.

The Arabic tradition preserves a huge number of anecdotes and sayings from this period. One problem lies in the sheer quantity of this material and the fact that it is written in an ancient Arabic which can be either ambiguous or incomprehensible to the modern reader. A far larger problem is that much of it is contradictory on very basic issues like whether the Family of the Prophet (Muhammad’s blood descendants through his daughter Fatima) should have inherited the right and obligation to provide leaders for the Muslim community.

This where the intellectual project comes in. The ideologues of IS have developed the argument that they alone can truly interpret all this history. They have tried to seize a certain sort of intellectual high-ground which gives them authority to make fundamental political decisions. In doing this they have developed a deliberately arcane vocabulary to demonstrate their intellectual superiority and deep knowledge of the sources.

Their modern enemies are described in terms taken from the early history of Islam which have, in many cases, not been used in normal speech or writing for centuries. In this way Shia, for whom they have an infinite hatred and contempt are referred to as rafidis, a term meaning “traitors” in that they rejected the first three caliphs, revered by all Sunnis.

Another example of this is the use of the term murji’in. One of the key concepts in the development of modern Islamist propaganda is the idea of takfir. The basis of this idea is that Muslims with whom you disagree on important issues of faith or conduct are not Muslims with whom you have a difference of opinion but are unbelievers who have abandoned true Islam. The logical consequence of this is that it is lawful, and indeed admirable, for believers to kill such people even though they claim to be worshippers of Allah and followers of Muhammad.

The murji’in were a group in the first century of Islam who held, quite reasonably we may think, that God alone can judge who are true Muslims and who are not. It was, in a sense, a live and let live philosophy.

For IS ideologues, this is intolerable and branding such people as murji’in brings the full weight of historical condemnation on them. But it also serves another purpose. It shows that IS intellectuals are totally familiar with these early Islamic discussions. The fact that such people are referred to by a name which is unknown to modern Arabs, reinforces their claims to be the true guardians of the ancient traditions against modern backsliders.

I could give other examples. The real point here is that if we want to understand the appeal of IS to its many recruits, an appeal which may seem incomprehensible to most of us, we have to take these intellectual claims into account: from their point of view, it is IS and IS alone which has the knowledge and understanding of the beliefs and attitudes of the earliest generation of Muslims, beliefs and attitudes which must shape the way the Islamic State is constructed if it is to lead Muslims to glory in this world and salvation in the next.

If we want to confront this murderous organisation effectively, we must understand and critique their ideology as well as dropping bombs on them.