You are here: Home / Senza categoria / How is Islamic State able to convince people of its crazy claims? 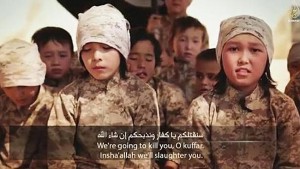 Britain is still reeling from shock at revelations that three mothers have fled to Syria – seemingly to join the “Islamic State” (IS) – taking with them their children aged three to fifteen, and leaving behind their husbands.

How could this happen, is the question on everyone’s lips.

The simplest answer: The “Islamic State” justifies itself on the basis of its reading of Islam, and its followers believe in its mission to establish Islam across the earth. Therefore, the problem is belief in a certain type of Islamist ideology.

There can be no doubt that this is true – or partly true: of course, IS’ entire rationale revolves around its claim to be the most authentic representation of Islam, and its ability to convince people of this claim.

But this necessarily invokes further questions. Is IS’ claim to be the most authentic representation of Islam accurate? No – not according to the orthodox consensus of Islamic scholars, nor according to the vast majority of Muslims.

But then, how is IS able to convince people of its claims?

The problem of evil

This is not really a new question. Especially since the Nazi Holocaust, the mystery of how “good” people can be pulled into a vortex of radicalisation, to then commit horrendous “evil,” has plagued social scientists, historians and philosophers.

Ordinary Germans committed horrifying atrocities against Jews for a range of overlapping reasons.

One was the context of Germany’s humiliation by rival powers. Defeated in the First World War, the country was subjected to crippling reparations that accelerated the country’s downwards spiral into financial, and consequently, political crisis.

Another was the prevailing context of widespread anti-Semitism across Europe. The scientific racism of the Nazis, incubated by nascent developments in evolutionary biology across the Western world, permitted Hitler and his associates to lend plausibility to their demonisation of “inferior” Jews, already seen as dangerous outsiders, now accused of being agents in an international conspiracy against the German “master race.”

Hitler’s peculiar vision of Nazi capitalism tied to land and population, rationalised his ideology of violent conquest to expand German ‘lebensraum’ (living space), premised on depopulating “inferior” groups that stood in his way.

This anti-Semitic ideology was deliberately disseminated in Nazi Germany using mass propaganda through TV, radio, newspapers, books, art and culture. Thus, as the economic, political and military crises facing the Nazi conquest intensified, so did the trajectory toward exclusionary solutions, culminating in the Final Solution.

Hundreds and thousands of ordinary Germans were complicit in this violent trajectory, not just because they often personally profited from doing so, but also because they told themselves they were just “following orders.”

That, in turn, was possible because of the increasing bureaucratisation of the Nazi machine, which meant that most Germans were only physically responsible for a tiny cog in the wider process of mass murder.

The example of the Nazis points not just to regressive ideology, but to the material circumstances which permit ideology to pull ordinary people into its orbit.

Last month, I attended the “Forum for Change” conference at Gladstone Library in the Royal Horseguards Hotel, which included a presentation by Akil Awan, Associate Professor of Modern History, Political Violence and Terrorism at Royal Holloway University.

Prof. Awan has advised numerous US and British government agencies on counter-terrorism, including the Home Office, Foreign Office, MI5 and MI6’s Joint Terrorism Analysis Centre, US military and US State Department.

“I don’t want to belittle the role of Islamist ideology at all,” he told the audience. “Islamist ideology is important and does need to be tackled. But ideology is rarely the primary driver of radicalisation. For the most part, ideology is the last factor on an individual’s pathway into a terrorist group. Often, discussions with Islamist extremists are the first time such an individual comes across ostensibly Islamic teachings.”

He pointed to the notorious example of the British Muslims who, before fleeing the country to join IS, bought copies of the book Islam for Dummies from the airport.

The main attraction of extremist ideology, Prof. Awan explained, was usually not the rational coherence or superiority of Islamist arguments, but other key social, psychological and political factors: social alienation, experiences of racism, and growing perceptions of discrimination against Muslims, which make many feel like outsiders; personal issues over one’s identity as a Muslim and a Westerner, involving a fatal erosion of self-esteem, depression, and even sexual frustration; the breakdown of family bonds; perceptions of the West’s hypocrisy, moral bankruptcy, and double standards in the Muslim world; all contributing to a sense of aggrieved hopelessness and anger with no obvious outlet.

Against that context of psychological instability, social alienation, and entrenched grievances, extremists offer a sense of belonging, a sense of meaning, and a promise of salvation, backed up with seemingly authoritative references to Islamic texts, communicated using evermore sophisticated efforts through social media and other forms of online propaganda.

Another speaker at the conference, Saeed Khan of Wayne State University, pointed to his research studying “radicalisation” in Bradford. During his field-work, young people hanging out on the streets late into the night told him they had nowhere to go. At home, their parents would watch ethnic television all day. The mosques, which never held programmes in English language anyway, offered them nothing.

This ultimately left them with few options, and no sense of belonging to mainstream society, beyond delinquency and criminality.

“The kids I spoke to could literally not conceive of a life outside Bradford, different to the experience of unemployment or menial jobs passed down from generation to generation,” said Khan. “Overwhelmingly, they simply resigned themselves to circumstances that they resent. Coupled with alienation and suspicion of a wider society that they believe has rejected them, this creates an underlying nihilism that, in some cases, could make them vulnerable to much more dangerous ideas.”

As Awan told the audience, Muslims particularly vulnerable to violent radicalisation not only identify themselves and most Muslims purely as victims, they do so to a degree that allows them to view their perceived oppressors in increasingly homogenous sub-human terms.

This narcissistic frame of mind, reinforced with pseudo-religious categories justified by narrow interpretations of Islamic texts, reinforces an overall identity of exclusion, for which no one else is to blame except the “non-Muslim West.”

It permits them to feel justified in lashing out, not just psychologically or intellectually, but even physically through righteous violence, which in turn permits their “transformation” from a position of hopelessness and frustration into, effectively, “the hero” chosen by God, sacrificing all to stand up for Truth and Justice, and now a powerful, instrumental player in a truly cosmic battle between the forces of good and evil.

This pathology of narcissistic alienation is reinforced because much of its underlying grievances are often not imaginary, but quite real.

There is compelling evidence of persistent, and in some cases, rising levels of anti-Muslim hatred in Britain, the US and Europe, as well as social exclusion – 70% of ethnically South Asian Muslims in Britain, for instance, are in poverty, and British Muslims suffer disproportionately from unemployment, discrimination in housing, health problems, and mental health issues.

Even taking on the lowest possible numbers – Prof. Stephen Walt of Harvard University calculates very conservatively 288,000 Muslims killed by US forces, compared to 10,000 Americans killed – Western violence in the Muslim world far outweigh deaths of Westerners due to Islamist terrorism.

This should not lead to a numbers game to determine whose terrorism is more justified. Neither is justified.

Yet the scale of death inflicted through Western state-terror raises uncomfortable questions about the chronic blind spots that plague public discourse on extremism.

Why does Islamic State extremism matter more than the West’s?

We cannot simplistically equate anti-Semitism with anti-Muslim hatred, but a number of studies highlight important parallels. Just as anti-Semitism had become commonplace in Europe in the early 20th century through ethnic, religious, cultural and other frames, negative portrayals of Muslims today through similar frames have also become widespread and normalised.

The constant repetition in media reporting associating Muslims with terror and extremism, lays the groundwork for widespread discriminatory attitudes, and fuels subliminal suspicions that Muslims are dangerous outsiders, potential terrorists, or terrorist sympathisers.

These processes also take place at an elite level, where an interlocking nexus of military, intelligence, financial, industry and political interests narcissistically project their insecurities about access to energy, declining capitalist profits, and climate impacts onto growing numbers of marginalised populations at home and abroad, mostly consisting of ethnic minorities and disenfranchised Muslims.

Implicit in these insecurities are unquestioned assumptions about the inherent superiority of the prevailing global system of neoliberal capitalism, the need for the system and the structures of privilege it encompasses to be protected against all external “threats”– without recognising that much of those threats are generated and exacerbated by the system itself, and the few who run it.

The ensuing division of the world into a “good” benevolent, advanced capitalist core, inexplicably besieged by “evil” barbarians who “hate our freedoms” is a convenient reconfiguration of racial hierarchies of old, now along new cultural, religious and civilisational categories of superiority and inferiority. At its root is a deep-seated sense of self-important victimhood, in which the benign West is projected as an innocent target of mad hordes of “Them.”

These psycho-geopolitical insecurities have allowed Western militaries to systematically violate international law, national civil liberties, human rights law and the Geneva Conventions in search of their own “final solution” of sorts to the threat of terror associated with hostile Others.

Innocent civilians are being killed because Western forces have been deliberately bombing of civilian infrastructure, loosening the rules of engagement (happening now in the US war on IS), categorising all adult males in “hostile” strike zones as “combatants,” who can therefore be targeted wholesale, and more. All this, in the name of “security,” “freedom,” “peace” and defending our “way of life.”

These ruthless, unlawful practices, which foreseeably result in mass civilian deaths on an unprecedented scale, are enabled by their bureaucratic compartmentalisation: Ultimately, everyone’s either following orders whose refusal is beyond contemplation, or fine-tuning longstanding procedures that establishment military intelligence experts endorse as essential.

The White Man’s Burden is thus transformed into a humanitarian crusade. The death of Others, in defence of Civilisation, becomes the means of our nobility.

The binary logic is the same as that adopted by IS: Islamist violence is bad, justifying vastly more repressive, intrusive, and deadly regimes of violence in the Muslim world, further accelerating civilian deaths and fuelling the grievances behind Islamist violence.

In either case, “their” violence is always “evil,” while “ours” is legitimate, if not noble.

Ultimately, Western and Muslim violent extremists are merely two sides of the same coin, locked into a spiral of mutual mass murder; narcissistic nihilists with a xenophobic saviour complex. Their fanatical beliefs are symptomatic of the same anomie, in which the powerful and the powerless desperately seek meaning, fulfilment and self-gratification by dehumanising and subjugating the Other.