You are here: Home / Analysis / How Iraq is becoming the next theater for Israeli-Iranian war 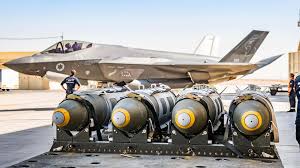 An Israeli strike in Iran would be risky even with F-35s, given distance to the target – about a thousand miles from Tel Aviv to Tehran — Iranian air defenses (including Russian-made S-300 anti-aircraft missiles) and potential Iranian retaliation. But Tel Aviv to Baghdad is less than 600 miles, like reported by nationalinterest.org.

Israel’s F-35 stealth fighters are positively supernatural: here, there and everywhere. In 2018, the Israeli Air Force claimed its new F-35s had attacked Iranian targets in Syria. Also in 2018, Arab press made dubious claims that IAF F-35s had flown over Iran.

Now comes reports that Israeli F-35s have attacked Iranian targets in Iraq, according to Arab media.

Western diplomatic sources allegedly the London-based Asharq Al-Awsat newspaper that on July 19, “Tel Aviv carried out an airstrike earlier this month against an Iranian rockets depot northeast of Baghdad.”

A second strike targeted another Iranian base, according to Asharq Al-Awsat. “The Ashraf base in Iraq, a former base used by the Iranian opposition People’s Mujahedin of Iran, was targeted by an air raid,” according to the newspaper. “The base lies 80 kilometers from the border with Iran and 40 kilometers northeast of Baghdad. The sources revealed that the strikes targeted Iranian ‘advisors’ and a ballistic missile shipment that had recently arrived from Iran to Iraq.”

Compounding the mystery were initial reports that unidentified drones conducted the attacks.

Amos Yadlin, former head of Israeli military intelligence, told U.S. publication Breaking Defense that Israel probably did attack Iranian targets in Iraq. “Apparently, Israel is really operating in Iraq,” he said. “It is sensible that Israel will not claim responsibility for such an attack as it may complicate things for the U.S. Without referring to the specific attack I can say that the F-35 is the ideal aircraft for such an attack.”

As so often in the Middle East, especially in the shadow war between Israel and Iran, it’s hard to know exactly what happened. The tale changes with whoever tells it, and why they’re telling it. Still, we can make some educated guesses.

First and foremost is the fact that Israel has refused to accept being surrounded by Iranian missile bases on its borders. The Israeli Air Force has turned Syria into a shooting gallery, with hundred of strikes hitting Iranian convoys crossing Syria to supply arms to Hezbollah into Lebanon, as well as Iranian and Hezbollah bases in Syria itself.

“We can – and we intend to – make it as difficult as possible and inflict a price tag that the Iranians aren’t willing to pay,” an Israeli military official told me during an interview in Jerusalem last February. Which suggests that Israel would shy away from striking Iranian facilities in Iraq, especially now that the U.S. doesn’t have a major military presence there anymore.

An Israeli strike in Iran would be risky even with F-35s, given distance to the target – about a thousand miles from Tel Aviv to Tehran — Iranian air defenses (including Russian-made S-300 anti-aircraft missiles) and potential Iranian retaliation. But Tel Aviv to Baghdad is less than 600 miles. Israeli aircraft could fly over Syria or even Jordan (as they did in their 1981 attack that destroyed Iraq’s Osirak nuclear reactor).

Weakened by years of warfare and a dysfunctional government and military, Iraqi defenses wouldn’t pose much of a threat. Iraq would be a fairly safe test as the Israeli Air Force absorbs its F-35Is.

None of which is conclusive proof that Israeli F-35s struck Iraq. But as in any murder mystery, the prime suspect has motive, opportunity and capability.