You are here: Home / MidEastGulf / How Iran smuggles weapons to the Houthis 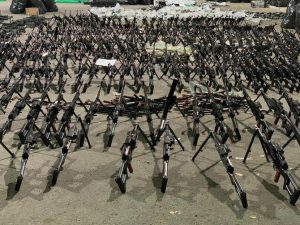 A captured gang of arms smugglers has revealed how Iran supplies weapons to Houthi militias in Yemen through a base in Somalia, like reported by arabnews.com.

The Houthis exploit poverty in Yemen to recruit fishermen as weapons smugglers, and send fighters to Iran for military training under cover of “humanitarian” flights from Yemen to Oman, the gang said.

The four smugglers have been interrogated since May, when they were arrested with a cache of weapons in Bab Al-Mandab, the strategic strait joining the Red Sea to the Gulf of Aden.

In video footage broadcast on Yemeni TV, gang leader Alwan Fotaini, a fisherman from Hodeidah, admits he was recruited by the Houthis in 2015. His recruiter, a smuggler called Ahmed Halas, told him he and other fishermen would be based in the Somali coastal city of Berbera, from where they would transport weapons and fuel to the Houthis.

In late 2015, Fotaini traveled to Sanaa and met a Houthi smuggler called Ibrahim Hassam Halwan, known as Abu Khalel, who would be his contact in Iran.

Pretending to be relatives of wounded fighters, Fotaini, Abu Khalel, and another smuggler called Najeeb Suleiman boarded a humanitarian flight to Oman, and then flew to Iran. They were taken to the port city of Bandar Abbas, where they received training on using GPS, camouflage, steering vessels and maintaining engines.

“We stayed in Bandar Abbas for a month as they were preparing an arms shipment that we would be transporting to Yemen,” Fotaini said.

On Fotaini’s first smuggling mission, his job was to act as a decoy for another boat carrying Iranian weapons to the Houthis. “The plan was for us to call the other boat to change course if anyone intercepted our boat,” he said.

He was then sent to Mahra in Yemen to await new arms shipments. The Houthis sent him data for a location at sea, where he and other smugglers met Abu Khalel with a boat laden with weapons from Iran, which were delivered to the Houthis.

“The smuggling routes are along traditional lines of communication that intermix with other maritime commerce. The temptation to look the other way is sometimes strong, so sharp attention is required to break these chains.”