You are here: Home / MidEastGulf / How Iran is leveling the drone battlefield 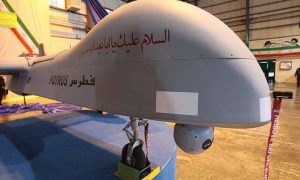 For the first 15 years of the U.S. war on terror, one of America’s greatest advantages was the killer drone. With names like “predator” and “reaper,” these unmanned aerial vehicles delivered deadly strikes from the sky against suspected terrorists with no risk of a human pilot being shot down, like reported by bloomberg.com.

Things began to change during President Barack Obama’s final year in office. Houthi rebels in Yemen began using crude drones, whose parts were supplied by Iran, against Saudi Arabia. Unlike their U.S. counterparts, these low-budget drones were more akin to the Japanese kamikaze planes of World War II, crashing into their targets. In one of Iran’s most brazen attacks, these kinds of drones, combined with cruise missiles, devastated Saudi oil fields in 2019.

The latest example of how the drone battlefield is getting more even comes from a small U.S. outpost in the Syrian desert near the Iraqi border known as Tanf. On Wednesday, according to the Pentagon, the U.S. base was attacked by drones and indirect fire. The perpetrator was almost certainly one of the Iraqi Shiite militias that have targeted U.S. bases for years with mortar and rocket fire.

There are two reasons to suspect Iran’s involvement. First, the proliferation of these crude, kamikaze drones is part of the Islamic Republic’s regional strategy. The country supports proxies, such as the Houthis in Yemen and Hezbollah in Lebanon, with weapons platforms, says David Schenker, a senior fellow at the Washington Institute for Near East Policy and a former assistant secretary of state for Near East Affairs. Often, drones are shipped in parts from Iran and assembled in Gaza, Syria, Iraq and Yemen, says Seth Frantzman, the author of a recent history of drone warfare in the Middle East.

The second reason to suspect Iran is the timing. Last week, Iraqis voted in elections for the national legislature. The political parties closest to Iran lost seats, while the party of the more nationalist and independent Moqtada al Sadr gained seats. The drone attack was a way for Shiite militant groups and their associated parties, which did poorly in the elections, “to assert their legitimacy,” says Joel Rayburn, who served as U.S. special envoy to Syria under the Trump administration.

It sounds odd. But it follows the playbook of a new kind of hybrid warfare. Iranian-backed militias in Iraq are part of larger organizations that include political parties and media platforms. As Iran’s proxies claim the U.S. manipulated the recent election to reduce the power of Shiite militias, those militias try to lure the U.S. into a confrontation that will bolster their political narrative.

Ten years ago, this kind of maneuver required volunteers in the form of suicide bombers. Now Iran and its proxies possess the drones that make more precise attacks on U.S. positions much cheaper.

So when did Iran develop its drone program? In his book, Frantzman says the Iranians began using unmanned aerial vehicles for surveillance purposes in the Iran-Iraq war. But the real breakthrough came in 2011, when Iran shot down a U.S. surveillance drone. Most experts, including Frantzman, now believe the Iranians were able to reverse-engineer the body of the weapon but still lack the technology to reproduce its advanced guidance and radar systems.

It goes to show that no battlefield advantage lasts forever. Stateless terrorist organizations such as al Qaeda and Islamic State have been able to use even cruder drones for surveillance and aerial attacks. But the U.S. is also adjusting. Last year, the Pentagon announced that it was streamlining its many anti-drone weapons systems, which include everything from handheld jammers that disable the wireless control of small drones to larger anti-rocket systems.

These defenses apparently worked this week in Tanf. No U.S. personnel were killed or injured in the attack. For now, the U.S. can defend against Iran’s drones. But at the same time, the attack shows how U.S. efforts to restrict the proliferation of drone technology have failed. In the Middle East, both sides are using the same kind of drone technology the U.S. had once hoped to keep for itself.