You are here: Home / Mediterranean / How Haftar lost the oil ports – as Libya moves closer to uncontrolled break-up

If the forces that seized oil ports from Haftar can hold them, negotiations over the country’s future will become even more complicated 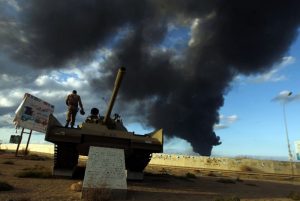 Last Friday, the Islamist-leaning Defend Benghazi Brigade (SDB) led an offensive to take the coastal cities between An Nawfaliya and Ras Lanuf in Libya’s oil crescent, like reported by middleeasteye.net.

In contrast to previous attempts, which were stopped by air strikes, this time they were able to seize their objectives. This is a severe blow for the commander of the Libyan National Army (LNA), Field Marshal Khalifa Haftar and the House of Representatives (HoR), Libya’s internationally recognised parliament.

From the staging area of the SDB near Zillah in the Sahara Desert to Ras Lanuf it is about 300km. The road conditions are not too bad, so it was possible for the Islamists to make the trip within one night. However, surprisingly, the advancing forces were not detected by one of the two Chinese Wing Loong drones operated by the Emirate’s air force from Al Khadim air field, south of Al Marj in the northern part of the Cyrenaica.

Maybe the recent reconnaissance focus was on the capital Tripoli and the Sebha area in southern Libya. Or maybe the SDB simply had good luck, as two drones are not enough to provide continuous coverage.

The tactics of the SDB in the first phase of the offensive were very clever. They approached in loose formations from the desert towards the coast and were already very close to their objectives at sunrise, when they immediately attacked several locations – An Nawfaliya, Bin Jawad, Es Sider and Ras Lanuf – simultaneously. This tactic made it impossible for the LNA air strikes to be effective.

The defenders were completely taken by surprise and withdrew quickly after some severe fighting. At the same time, the Shoura Council of the Mujahideen in Derna (SCMD) in northeastern Cyrenaica increased its activities to fix LNA forces in the region. Some sorties of the already overstretched LNA air force needed to be flown in the area.

The SDB is allied with the remaining elements of Ibrahim Jadhran’s Petroleum Facility Guards (PFG), which had blocked any oil exports from the central coast for years until they were evicted by the LNA last September. After some casualties in recent months, together they number only about 800 to 1,000 fighters, not enough to defeat the LNA.

Consequently, the leaders of the SDB have tried since last autumn, with the support of Libya’s controversial Grand Mufti Sadekh al-Ghariani, to motivate the powerful Misrata militias to join the fight. This time they were successful. There is strong indication that a number of fighters from Misrata’s experienced al-Marsa brigade reinforced the offensive, probably a decisive element of the plan.

Currently, the LNA is conducting a major counteroffensive, also employing troops from northern Cyrenaica. Some forces even needed to be redeployed from the battlefield in Benghazi to the oil crescent. This also includes elite units equipped with modern armoured tactical vehicles, probably delivered by the UAE. If the SDB is not able to mobilise significantly more support from other Misrata militias, the LNA has a good chance of success.

There is information that reinforcements for the LNA from the western city of Zintan are on their way to the oil crescent. If this is confirmed, a major involvement of Misrata on the side of the SDB becomes much more likely.

If Haftar can retake all the lost terrain, he will most probably attempt to secure his southern flank in a much more efficient way. This could include a ground offensive towards the Al Jufrah Oasis, located in the centre of the country on the way to Sebha, the capital of the southern region Fezza. This would provoke some more fighting with the Misrata militias because, for them, Al Jufrah is decisive for their line of communication to the south where they control several oilfields.

If the counteroffensive does not fully succeed, this will certainly gravely undermine Haftar’s position in an already difficult moment for him. In mid-February, he embarrassed the Egyptians when he refused to meet Fayez Serraj in Cairo – probably not the best idea, given his dependence on support from Cairo. Furthermore, he currently faces problems with important tribal leaders and the Madkhali Salafist militias, which are fighting for the LNA.

Should the SDB advance closer to Benghazi in force, an intervention by Egypt cannot be ruled out. The Egyptians will certainly use all means to prevent Islamists from assuming power in the east of Libya. Their air force would probably be their means of choice.

For the past couple of days, the situation in Tripoli has been relatively quiet. It could well be that the militias affiliated with the Government of National Accord (GNA) were aware of the intentions of the SDB, PFG and the Marsa brigade and decided not to engage the Misrata-affiliated militias during these days in the capital. Allegedly, some members of those groups even joined the SDB in their fight against Haftar.

On the political side, while Fayez Serraj’s GNA, the international supported government of Libya, rejected the offensive, the Grand Mufti and probably also Khalifa Al-Ghwell’s Islamist Salvation Government are in support of it. Maybe the operation needs to be seen in context with the brief occupation of the National Oil Corporation headquarters in Tripoli by militias close to al-Ghwell last Friday.

If the SDB can maintain control over the oil ports, this could significantly strengthen the Mufti and al-Ghwell and eventually lead to the end of Serraj and the GNA. Without any doubt, it would significantly weaken the position of Serraj, who has no means to influence the warring factions. This is bad news for the Europeans, who count on him in their refugee deal.

The developments in the oil crescent will certainly make any negotiations between the two major Libyan military powers, the Misrata and the LNA, much more difficult, if not impossible.

Furthermore, the political dialogue between the HoR and the GNA will be also much more complicated. For the HoR and Haftar, it doesn’t make a lot of sense to negotiate with somebody who has no influence on the ground.

It is not yet clear who will win the fight for the oil crescent, but the rift between east and west will certainly deepen. If fighting continues near the terminals, oil exports will be halted. It could well be that the current events bring Libya a step closer to an uncontrolled break-up.