You are here: Home / Analysis / How break down Iran’s military strengths and 3 parts of its asymmetric defense strategy

Iran may suffer from military disadvantages, but that doesn’t stop it from being a major military player in the Middle East, like reported by dw.com 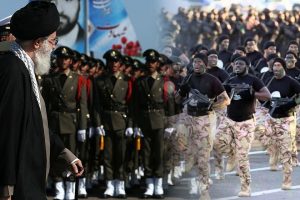 Iran is a major military power in the Middle East, with an estimated 534,000 active personnel in the army, navy, air force and the Islamic Revolutionary Guard Corps (IRGC).

Global Firepower Index, an online military ranking website, ranks Iran No. 13 in the world out of 136 countries. Their listing is based on more than 50 factors including war-making potential in conventional (non-nuclear) forces, manpower, geography and finance. To compare to other regional powers, Turkey ranks ninth, Egypt 12th, Israel 16th and Saudi Arabia 26th.

Iran’s population of 82 million means that it can draw on a deep well of manpower. This is a key factor in sustaining long wars of attrition such as the 1980-88 Iran-Iraq War.

However, at $16 billion (€13.4 billion) in 2017, Iran’s defense budget falls short of individual regional rivals and is minuscule in comparison to the combined defense spending of countries it is most likely to come into conflict with: Israel’s $18.5 billion (plus $3.5 billion in military aid from the US); Saudi Arabia’s $76.7 billion; and the United States’ nearly $600 billion.

Shiite Iran is outgunned financially by those it perceives to be its main military threats — the United States, Israel and Sunni Gulf Arab states. It also nearly encircled by United States military bases and lacks the security guarantees its regional Gulf Arab rivals and Israel receive from the United States.

In addition, Iran has been under a four-decade-long US arms embargo and UN arms restrictions since 2006. This has forced Iran to rely largely on the domestic production of weaponry. Meanwhile, Iran’s regional rivals are provided cutting-edge Western military systems.

In order to compensate for its relative weakness, Tehran relies on asymmetric capabilities and cost-raising deterrence measures.

One plank of Iran’s defense strategy is “forward defense,” led by the special operations Quds Force of the IRGC. The strategy involves the use of regional allies and proxies, known as the “axis of resistance,” as leverage to weaken, bog down, deter or fight Iran’s enemies away from its soil.

Such groups include the Popular Mobilization Units in Iraq fighting the “Islamic State”; foreign Shiite militias fighting on behalf of Iran’s ally Syria; the Lebanese Shiite group Hezbollah; Houthi rebels in Yemen; and Palestinian Islamic Jihad. Iran is also one of several regional countries exerting influence on the Palestinian group Hamas in the Gaza Strip.

Although aligned with Iran politically and militarily, these groups have to varying degrees their own agency and local political interests where they operate.

A second plank of Iran’s military strategy is short, medium and intermediate range ballistic missiles capable of hitting Israel, Gulf Arab states, US military bases in the region and parts of Europe.

As the International Crisis Group notes, Iran views these ballistic missiles as a deterrent against Israel and, in the event of an attack on Iran, as a means to hit enemies on their own soil or US military bases in the region. While Iran presents ballistic missiles as defensive weapons, its enemies consider them an offensive threat.

Ballistic missile policy can be combined with the forward defense policy, such as with Houthi ballistic missile attacks on Saudi Arabia in response to its war in Yemen and Iran’s arming Hezbollah with an array of missiles in Lebanon. Iran denies providing the Houthis with ballistic missiles or components.

Bringing the world economy to a standstill

A third means of Iranian deterrence is the threat to choke the world economy by shutting down the flow of oil in the event of conflict. Around one-fifth of the world’s traded oil passes through the Strait of Hormuz between the Persian Gulf and the Gulf of Oman.

Iran’s strategy is to block the chokepoint through mines and employ asymmetric and unconventional naval tactics against enemy warships, such as swarming enemy warships with small, low-cost watercraft and speedboats armed with anti-ship missiles and torpedoes.

Iran may be developing a similar policy in Yemen, calculating that in the event of a conflict with a regional enemy, the Quds Force and its Houthi partners could shut down shipments in the Red Sea through the Bab al-Mandab Strait, through which 4 percent of the world’s traded oil passes.