You are here: Home / Analysis / How and why islamic terrorist groups use women as suicide bombers 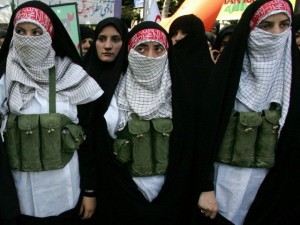 At the age of 16, Sana’a Mehaidli, who had four brothers and a sister, blew up herself and a truck full of explosives next to an Israeli convoy in Lebanon during the Israeli occupation of south Lebanon on April 9, 1985. She is believed to have been the first female suicide bomber.

Since then, female suicide bombers have become a disturbing and increasing phenomenon from North Africa to Central Asia, the Middle East and Europe. This is a matter of great concern because of its implication that women and children may become key actors in future terrorist attacks.

The terrorist organization Boko Haram has abducted hundreds of women and schoolgirls over the years and forced them to become suicide bombers. There is a causal relationship between the education of women and a decrease in terrorist violence. This is why terrorist groups such as Boko Haram are against female education.

In order to produce more practical solutions against female terrorism, one should better comprehend the motivations of female suicide bombers and terrorist organizations’ strategies to attract them. How have women, who are mostly viewed by society as protected persons and givers of life, become pivotal agents of terrorism?

Why are they preferred as suicide bombers to men? Firstly, women can hide bombs and explosives better under traditional clothing such as the burqa or abaya, or pretend to be pregnant in order to avoid security detection. Secondly, it is believed by terrorist groups that attacks perpetrated by women attract greater media attention than male-perpetrated missions due to their dramatic effect.

Several studies suggest that many female bombers do not volunteer to kill themselves, but are coerced. Women may be pushed to do so for several reasons, such as desperation, pressure, ideology or religious belief.

Chechen female suicide bombers named Black Widows — whose husbands were killed during the second Chechen war by Russian security forces, or had lost all their male relatives — carried out terrorist attacks in 2002 and 2004 in Russia to avenge their spouses.

Far more disturbing is that women are forced to become suicide bombers due to rape, dying so as to regain their “honor.” In 2009, Iraqi woman Samira Ahmed Jassim was arrested for recruiting female suicide bombers by having them raped, then persuading them that martyrdom was the only way to escape the shame.
She is believed to be responsible for coordinating the rape of 80 young Iraqi women in order to persuade them to become suicide bombers. She is said to have sent 28 women to their deaths.

There are also examples of women joining terrorist groups due to politics or ideology. This year Turkey faced several terrorist attacks, some carried out by female suicide bombers affiliated with the Kurdistan Workers’ Party (PKK). Founded as a Marxist organization, the PKK — which prides itself on “gender equality” — is among the first terrorist organizations to exploit women.

This is not to say that all women have been forced to become suicide bombers. Some wilfully do so. Marxist or jihadist, religious or ideological, these women are murderers of innocent people. No ideology or belief can justify these terrorist attacks. The world could become a better place with the help of women, but not of those with blood on their hands.