You are here: Home / Africa / How al-Qaeda and Islamic State are fighting for al-Shabaab affections in Somalia 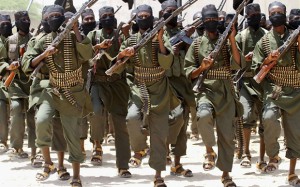 The global terror movements al-Qaeda and Isil are fighting a tug-of-war for the affections of al-Shabaab in a battle which could ultimately hasten the demise of Somalia’s home-grown jihadist movement, researchers say.

Islamic State of Iraq and the Levant (Isil) has repeatedly reached out to militants operating in Somalia with a series of recruitment videos showing young Somali members of Isil urging their brothers to join them.

The operation has had some recent success, with two senior al-Shabaab commanders pledging their allegiance to the global terror network.

Hassan Sheikh Mohamud, Somalia’s president, said the defections were “symptomatic of a group that has lost its way”, and warned that Somalis “do not need a new brand of horror and repression”. He called on disillusioned al-Shabaab fighters to take advantage of a government amnesty instead.

For Isil, experts say, they will be celebrated and heavily-publicised as examples of its claim to have taken over from al-Qaeda as the dominant global network.

To win over the whole of al-Shabaab, an admired and established terror group with a large army of both local and foreign recruits, would represent “a massive scalp”, they added.

Africa’s other key terrorist organisation, Boko Haram, in Nigeria, pledged allegiance to Isil in March this year, and in return its fighters are purportedly being sent to Isil camps for training.

Isil hailed Boko Haram’s pledge, with a spokesman saying in a recording posted online that it allowed “the expansion of the caliphate to west Africa”.

Senior al-Shabaab leaders are however said to be reluctant to break away from al-Qaeda, which provided financing, training and logistical support after the struggling group pledged allegiance to the late Osama bin-Laden’s movement in 2012.

Others believe al-Shabaab should not be distracted from its domestic, nationalistic aims by the more ambitious plans of Isil. Some of the same militants reportedly objected to the alliance with al-Qaeda for the same reason.

Successive heads of the movement have repeated their allegiance to Ayman al-Zawahiri, its current leader, and the group’s official media, while praising Isil commanders, continues to speak “respectfully” of the al-Qaeda chief, one commentator said.

Al-Zawahiri is himself said to have suggested in a recent propaganda message that al-Shabaab’s leadership disapproved of Isil’s methodology, including its bloodthirsty displays such as the filmed beheading of hostages.

“The senior leadership of al-Shabaab has remained quite loyal to al-Qaeda – the younger guys who don’t hold the purse strings might be more drawn to Isil,” he said.

“Al-Shabaab is still very rooted in local Somali dynamics rather than something that’s more indicative of an ideology.”

Al-Qaeda also has an established network in Africa to deliver funding and logistical support while Isil networks are not yet thought to be well-established, he added.

“It’s not clear yet what swearing allegiance to Isil would translate into tangible benefits,” he said.