You are here: Home / Analysis / How a Millennial became an Islamic terrorist 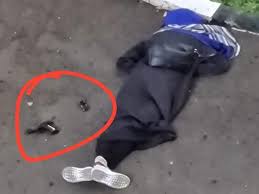 Last Wednesday, 25-year-old Indonesian university dropout Zakiah Aini wrote a letter saying goodbye to her family and headed out of the house. As morning turned to dusk, her parents began to worry – there had been no word from Zakiah, who rarely left the family home. They became even more anxious when her sister found the goodbye note, like reported by theaseanpost.com.

“Her sister wanted to report her [missing] but didn’t quite know where to report to,” said Reno Fitria Sari, a lecturer in Forensic Psychology at Paramadina University.

Suddenly, news broke that a woman had attacked the national police headquarters in Jakarta and had been shot dead. Soon afterwards, police officers arrived to tell the family that the attacker had been none other than Zakiah Aini.

Zakiah became the second woman in the span of four days to carry out a terror attack in the world’s most populous Muslim nation of 270 million people. On Sunday (4 April), a woman and her husband detonated explosives outside a church in Makassar, South Sulawesi, killing themselves and injuring 20 civilians.

Police said Zakiah acted as a lone wolf and based on initial investigations had been inspired by Islamic State (ISIS) ideology. She posted a picture of an ISIS flag on her Instagram account and wrote about the struggles of jihad (holy war) just 21 hours before her death.

But there are signs she was radicalised years before her fateful demise. Her beliefs also give an insight into the radical doctrine held by the country’s ISIS supporters and would-be jihadis.

Zakiah was an undergraduate at Gunadarma University in Jakarta in 2013, but she rarely attended classes and dropped out during the fifth semester despite achieving good grades.

Her failure to complete her university studies, despite being a bright student and coming from a middle-class family, should have been a red flag, said Nasir Abas, former leader of the Southeast Asia branch of al-Qaeda’s Jemaah Islamiyah.

“Her family could afford to pay for her education as they’re from the middle class. For sure it was her takfiri belief that made her drop out of university,” he said, referring to the Arabic word for a Muslim who accuses another of apostasy, or not being a true believer.

Reno, a forensic psychology lecturer who has interviewed some 80 convicted terrorists as part of her work, said initial indications showed Zakiah deliberately chose not to continue with her studies because she believed her education was taghut – a term used in Islam to denote a focus of worship other than God.

“[She thought this] because during her education, she needed to follow the teachings of her lecturer, when her lecturer was only a human being,” Reno explained.

The letter Zakiah left behind for her family contained more evidence of her radicalised state of mind, with a drawing of a building labelled “jihad” on top and “tawhid” – a term for one of Islam’s central tenets that declares absolute monotheism – on the bottom.

Sofyan Tsauri, a former senior member of al-Qaeda in Southeast Asia, told the media that Zakiah writing “jihad” on top of the sketch of the building showed how strong her belief in it was.

“[It showed her belief] that if she died while waging jihad, she would accumulate merits for her family [as a sign] that she loves [them],” said Sofyan, who was previously jailed for procuring weapons for a terror training camp in Aceh, North Sumatra.

Zakiah also told her family not to participate in the country’s future elections, a point Sofyan said was important to note. “Zakiah told her family to stay away from elections, that they give birth to idolatry and the constitution is man-made. This [belief] is a special feature of salafi takfiri jihadis,” he said, referring to ISIS ideology.

“From here, the brain washing and indoctrination changed Zakiah’s way of thinking – she very much hated the current age and the environment around her,” said Sofyan.

Her attack on the police headquarters came just four days after the Makassar church bombing in South Sulawesi, which was carried out by a newlywed couple – with the wife believed to be four months pregnant.

Benny Mamoto, head of the National Police Commission and a former senior counterterrorism police officer, told the media that Zakiah was “inspired by the Makassar bombing”.

Mamoto said that the Makassar attack was aimed at avenging the arrests of Jemaah Ansharut Daulah (JAD) members before the bombings. In January, some 19 JAD members were arrested in South Sulawesi.

According to Mamoto, Indonesian police counterterrorism squad Detachment 88 had arrested 1,173 suspects between January 2018 and 1 April this year to pre-empt “hundreds of terror attacks”.

The two recent attacks have highlighted the increasing involvement of women in Indonesian terrorism, which was once the preserve of men.