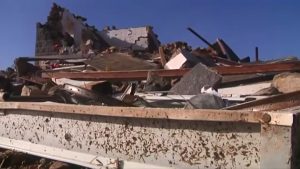 The SABA agency, under the control of the internationally recognized government, says the attack took place during Friday prayers in the Marib province, east of the rebel-held capital. It says the death toll is expected to rise.

The government, which is heavily backed by a Saudi-led coalition, is battling the Houthis and military units loyal to a former president.

The war in Yemen has killed more than 10,000 civilians and pushed the Arab world’s poorest nation to the brink of famine.