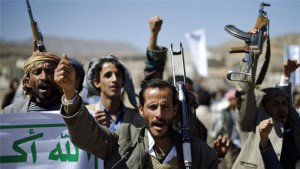 Yemen’s Houthi fighters have threatened to undertake suicide bombings in Saudi Arabia if the kingdom continues to launch airstrikes against the group’s positions.

Abdel Mon’em Al-Qurashi, a senior member of the Houthis Executive Committee, said on Saturday that the group would destroy the Saudi regime for its “aggressive” policies, Iran’s Fars news agency reported.

“If Saudi Arabia continues its aggressions against the oppressed Yemeni people, [Houthi] fighters will pave the way for the Saudi regime’s destruction by conducting martyrdom-seeking operations inside Saudi Arabia in the coming hours,” Quraishi told Fars.

According to the Houthi-run interior ministry, at least 24 civilians were killed in Friday’s strikes, bringing the toll from Thursday and Friday to 45 civilians.

The figures of civilian and combatant casualties could not be independently confirmed, though Amnesty International said at least six children were among those killed in Sanaa on Thursday.