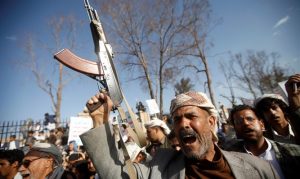 In the wake of the Israeli attack in Syria on dozens of Assad and Iranian Quds force targets in response to the four rocket launches to the Golan, Iranian Houthi insurgent spokesmen supported by Iran stated: “Our army could hit the depths of Israel’s occupied territories.” At the same time, Russia has reported: Israel has attacked Syria four times this month – with indecent actions that threaten the stability of the region, like reported by inn.com.

According to a report on PressTV, a media affiliate of the Iranian regime, a spokesman for the Houthi forces said his fighters were “fully prepared to respond to the Tel Aviv regime in case the Israeli military commits an act of aggression.”

The spokesman, General Yihya Sari, claimed that Israel had “aspirations in Yemen” and in the Persian Gulf region – and, if it tries to fulfill its aspirations, “Yemenis would not hesitate to respond to Israeli folly.” In a direct threat to Jerusalem, he said the rebels had the ability to hit “deep in the occupied territories”, among other things by means of unmanned missiles and aircraft.

Meanwhile the Russian Foreign Ministry issued a statement addressing four alleged Israeli attacks in Syria. The statement read that on December 12, on the day of the fighting in the south, Israel attempted to eliminate senior Islamic Jihad operative al-Ajuri, in the center of Damascus, “whose home was used for diplomatic purposes” – an Israeli source said he used the venue to mediate between various organizations. The attack, according to the Russians, killed civilians and did significant damage to buildings but, according to the announcement, the senior jihadi emerged unharmed.

Russia claimed that six days later, Israel carried out an attack on the Syrian-Iraq border during which fighter jets used Jordan’s airspace. The widespread attack by the IDF against Syrian army and Iranian Quds Force targets was carried out with 40 cruise missiles.

“These events are of great concern to Moscow,” the Russian Foreign Ministry statement said. “We believe it is a must to respect and preserve Syrian sovereignty and its territories and that of other countries of the region. So far, Israeli actions have intensified the tension around Syria and the potential for conflict and are contrary to normalization efforts and achieving stability and political settlement in Syria.”