You are here: Home / MidEastGulf / Houthis fire missile at Saudi military base after deadly Yemen raid 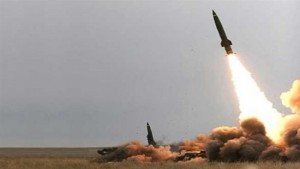 Yemeni rebels have fired a missile at the main Saudi air base used by the Arab coalition in its bombing campaign but it was intercepted, the coalition said on Wednesday.
It was the second such missile launch since a coalition air strike killed more than 140 people attending a wake for the father of a rebel leader in the Yemeni capital Sanaa on Saturday prompting threats of revenge.
Air defence forces “intercepted a ballistic missile, launched by the Houthi militias toward the city of Khamis Mushait and destroyed it without any damage,” a coalition statement said.
Khamis Mushait is home to an air base which has been at the forefront of the coalition bombing campaign against Houthi rebels and their allies.
It is about 100 kilometres (60 miles) from the Yemeni border.
Saudi warplanes targeted the launch site after the missile firing, the coalition said.
The attempted rebel strike marks at least the fifth time they have tried to hit Khamis Mushait since the coalition began its bombing campaign in support of the Yemeni government in March last year.
On Sunday, rebels launched a missile against another Saudi air base, in the city of Taif, 500 kilometres (300 miles) from the Yemeni border, but it too was shot down.
middleeasteye.net