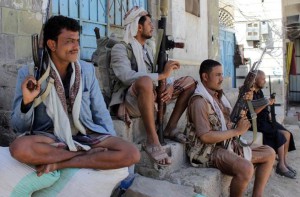 Yemen’s rebels fired rockets and mortars into Saudi Arabia, killing at least two civilians and reportedly capturing five soldiers, prompting a Saudi-led military coalition to warn it would strike back.

Saudi Arabia’s state airline canceled flights into the border area of Najran as schools closed early amid the attack, the first by Houthi rebels, to target a civilian area in the kingdom since the start of the airstrikes. Meanwhile, hundreds of families fled the southern Yemeni city of Aden after the Houthis advanced into their neighborhoods, firing indiscriminately as they took over surrounding, towering mountains.

In the Saudi region of Najran, the Houthi shelling killed two Saudi civilians and damaged buildings, Yemeni tribal leaders said. The state-run airline, Saudia, said flights to and from the area would be suspended until further notice, without elaborating. It is the only carrier flying to Najran.

“What happened today is part of the chaos that the Houthi militias live with,” he said, adding that “all options are open” to the kingdom to ensure its security.

Asiri’s statement did not offer any details about casualties, nor did it mention the alleged abduction of the soldiers. Saudi Apache attack helicopters targeted Houthis near the border, said another military official, who spoke on condition of anonymity, as he wasn’t authorized to brief journalists.

Last week, three Saudi troops and dozens of rebels were killed in the fighting there.The assault underscored how the Iranian-backed Houthis are still capable of launching major operations despite more than a month of Saudi-led airstrikes targeting them and their allies – military units loyal to former president Ali Abdullah Saleh. The Saudi-led coalition began bombing on March 26 in support of exiled President Abed Rabbou Mansour Hadi’s embattled government. The airstrikes and fighting on the ground have killed hundreds and displaced at least 300,000 Yemenis.

In Aden, residents said Houthis advanced into a large section of the city’s Tawahi district, forcing hundreds of families to flee to safer areas using boats. The residents said they had been trapped inside their homes for weeks.

Mona Abdel-Maged, among residents of the area reached by telephone, said a mortar shell had killed her husband, then a second shell killed six men trying to pull his body from the rubble. “After burying the dead, we would still find torn limbs and body parts in the streets. So we go back and bury them,” she said. Mona Mohsen, one of the residents, said panic and the sound of gunfire sent people rushing into the streets.